For other uses, see Reunion.

2367
Reunion is a Star Trek: The Next Generation novel written by Michael Jan Friedman, the first hardcover book of the TNG series.

In the grand tradition of Spock's World, The Lost Years, and Prime Directive — each a blockbuster New York Times bestseller — Pocket Books presents the eagerly awaited, first Star Trek: The Next Generation hardcover: Reunion, a novel of mystery, intrigue, and peerless adventure…

Before he commanded the Enterprise, Jean-Luc Picard was the captain of the legendary deep space exploration vessel, the USS Stargazer, on an incredible twenty-two year voyage. Now, Picard's past and present collide on board the Enterprise as he is reunited with his former crew in a fantastic adventure that takes the Enterprise crew into the heart of the Romulan Empire.

Together, Captain Picard, Commander Riker, Lt. Commander Data and the rest of the Enterprise crew must join forces with the former crew of the Stargazer to solve the mystery of Picard's past before a ruthless assassin unleashes a terrible revenge that threatens the entire galaxy.

Captain Morgen, who once served under Jean-Luc Picard on the USS Stargazer, is heading home to Daa'V to be installed as their hereditary ruler. He has asked for several of his old comrades from the Stargazer to serve as his honor guard at the coronation, so the Enterprise is transporting them. The Daa'V and the Klingons are ancient enemies, but both being allies of the Federation has led to an uneasy treaty between them.

During the voyage, the holodeck is sabotaged while Morgen and Worf are taking part in one of the latter's holodeck programs, nearly killing them. Soon after, the Enterprise becomes trapped in a subspace slipstream which carries them at high warp speed. An attempt to break free by accelerating past it fails and blows out ship's systems. In the chaos, someone fires a phaser at Morgen, Beverly Crusher and Tricia Cadwallader, badly injuring the latter. It is clear one of the old Stargazer crew is targeting the others.

Gilaad Ben Zoma, Picard's old first officer, is stabbed with a Klingon ceremonial knife and left in a critical condition. The knife implicates Idun Asmund, who was raised by Klingons. Her twin sister Gerda had previously tried to kill Morgen on the Stargazer in co-operation with rogue Klingons, later dying in an accident after serving time incarcerated. Idun is taken into custody but denies the charges, pointing out the murder attempts are not being done in accordance with Klingon honor.

Phigus Simenon, the Stargazer's old chief engineer, works out a way to break free of the slipstream by using the ship's shields to alter the trajectory. It succeeds but also allows Asmund to escape the brig. Beverly realizes the real culprit is Carter Greyhorse after listening to an old tape from Jack Crusher in which he speculated Gerda and Greyhorse were in a secret relationship. Greyhorse beams Picard off the bridge, intending to scramble the rest of the old crew's molecules in front of him, but Riker gets everyone to remove their combadges to prevent it. Asmund manages to beam in and apprehend Greyhorse.

The slipstream journey has taken the Enterprise into Romulan space and they are threatened by one of their warships, but Riker manages to escape them by deliberately re-entering the slipstream and only allowing their pursuers the information needed to escape after they have done so themselves. The Enterprise makes it to Daa'V for the coronation.

This novel was likely the inspiration for Pocket Books to create the Star Trek: Stargazer series, which are all prequels to the "present" of Reunion. The flashbacks in the novel occur in 2355, alongside the present events of the later series. 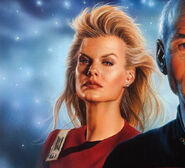 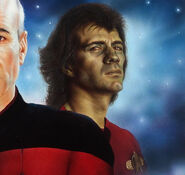 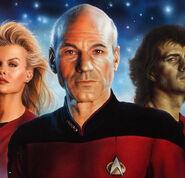 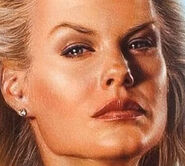