Teaser, November 14, 1970
Believing a revolt on the planet Dak-Alpha had been put down by the space Federation governor, LeBrun, Captain Kirk took a party from Enterprise to ferry prisoners to Earth. The whole thing was a trap, and Kirk and his men found themselves at gunpoint within one of five massive statues.

A revolt by native Alphans on the Federation colony Dak-Alpha is reportedly suppressed, and Governor LeBrun asks Starfleet to pick up imprisoned rebel leaders before they can make any more trouble. Admiral Nivens dispatches the Enterprise, and the next day Captain James T. Kirk, Spock, Hikaru Sulu, Hopkins and a crewman lands the Galileo at the designated coordinates, strangely in an arid wilderness. Above a rise, they discover massively tall statues of themselves. A door opens in the foot of Kirk's statue, and when they hear LeBrun call them up, they ride a turbolift to the Kirk statue's head. There, they are confronted by rebels, who hold LeBrun hostage and seize their phaser rifles.

Because LeBrun disabled all spacecraft on the planet, the rebel leader had been forced to lure a starship to Dak-Alpha. He plans to transfer an invasion force to the Enterprise, and the huge statues will become monuments honoring the deaths of the landing party members. The Kirk statue is lowered into a huge underground military hangar, and the landing party subjected to energy fields that will kill them, but leave their bodies animated as zombie slaves. Although LeBrun short-circuits the equipment at the cost of his life, the crew rise and obey commands. When Montgomery Scott lands a second shuttle nearby with an armed rescue squad, rebels engage them, then allow Scott to "rescue" Kirk's team.

Both shuttles return to the shuttle bay. As the rebel leader watches on video, Kirk, Spock, and Sulu assemble the crew, then throw anesthesia gas grenades at them. The three wear gas masks as they make their way back to the hangar deck. They send five shuttles down by remote and fly back together in the sixth shuttle. The three are taken below ground to die, while the six shuttles are flown back by armed rebel troops.

The soldiers expect to find the ship littered with corpses, but instead are confronted by squads of security officers. Kirk's team had actually survived exposure to the zombie weapon and managed to alert the crew before gassing them. Most of the invading rebels are captured, but a few flee in the Einstein. Meanwhile, Kirk, Spock and Sulu sabotage the main generators of the rebel base. Aboard the Galileo, Pavel Chekov witnesses scores of rebels flee as their base explodes. All are to be rounded up for a trip aboard the Enterprise. 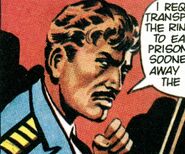 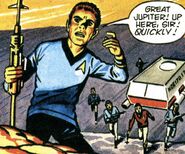 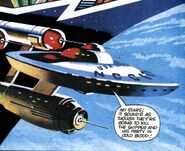 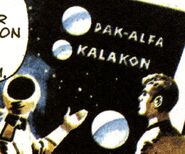