For other uses, see Rules of Engagement.

The Original Series No. 48

Sudden revolution on the planet Dekkanar brings Captain Kirk and the Enterprise running to evacuate Federation personnel trapped there. But their orders from Starfleet are quite clear: the Enterprise is to assist in the evacuation, no more. No weapons are to be displayed, no shields raised, no shots fired.

Meanwhile, halfway across the galaxy, an experimental Klingon warship sets forth on a mission of its own, a warship with hidden - and therefore undreamed of - capabilities, commanded by a warrior who will stop at nothing to bring glory to the Empire - and restore his own lost honor.

The Enterprise is assigned to evacuate the Federation embassy on Dekkanar: The planet has broken off diplomatic ties under pressure from terrorist groups. However, the ship is placed under General Order Twelve: They are to make no offensive or defensive moves unless clearly attacked.

Meanwhile, Klingon captain Kasak, who has been reduced to taking ships on test runs since being caught up in Kirk's encounter with Koloth on Station K-7, is given charge of Hakkarl, a battle cruiser controlled remotely from a scout ship, Tazhat. He takes it on an unauthorised mission to Dekkanar, intending to provoke Kirk into firing on him, breaking the treaty so the Organians will step in and award the planet to the Klingons.

Kasak first claims to Kirk that he is planning to defect, believing that if he then tries to take the experimental ships away Kirk will attempt to disable them. However, the plan falls apart when a fleet of Klingon ships arrives to take him into custody. Kasak convinces the fleet commander, Korzhan, that the Dekkani terrorists have fired on him in the hope Kirk will defend them but Kirk simply shields their ships and manages to talk Korzhan round.

Kasak's crew surrender to Korzhan, leaving him to challenge Kirk alone. The Enterprise manages to damage Hakkarl's control system and it ends up destroying Tazhat, killing Kasak. Realising that the only alternative is Klingon occupation, Dekkanar resumes ties with the Federation.

The stardate is given as 2213.5; however, since this would put the story during Kirk's first five year mission, the Pocket Books Timeline adjusts it to 7818.1. 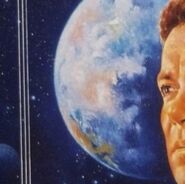 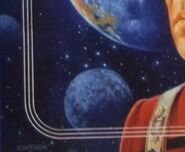