Throughout the history of the universe, there have been multiple timelines, alternate realities and parallel universes that have contained versions of SS Enterprise NX-01, as well as various duplicates.

SS Enterprise NX-01, from what is considered the primary universe.

After the Destruction of Earth in an alternate timeline.

As a time-displaced generation ship

ISS Enterprise in the mirror universe. 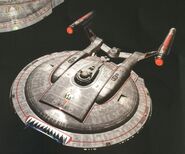 Another version of the ISS Enterprise.

In alternate timeline created when Jonathan Archer was infected by interspatial parasites, the Xindi destroyed Earth and Enterprise, under the command of Captain T'Pol, led the fleet of surviving Human ships to Ceti Alpha V in 2154. In 2165, the Xindi attacked the Ceti Alpha system and crippled Enterprise, which was subsequently destroyed in a subspace implosion, resetting this timeline. (ENT episode: "Twilight")

In another timeline involving the Xindi, Enterprise was thrown back in time during the passage of a vortex. Arriving in 2037, Enterprise remained in the Delphic Expanse to avoid contaminating its own history. In 2154, the generation ship Enterprise, commanded by Captain Lorian, caught up with Archer's ship. They cooperated to outwit the Kovaalan inhabiting the nebula surrounding the vortex, allowing Archer's ship to avoid time displacement during the passage. Lorian's ship remained behind, presumed destroyed or erased from time. (ENT episode: "E²")

In a universe where Terra Prime successfully attacked San Francisco in 2154, United Earth pulled out of the Coalition of Planets talks. Jonathan Archer continued to take Enterprise on missions to support the fledgling Interstellar Coalition. A century later, former first officer T'Pol was a decisive voice on Earth's behalf to join the IC during the Babel Conference. (ST - Myriad Universes novel: A Less Perfect Union)

In a version of events where Vulcans remained a violent and emotional species, Andoria became the target of the Xindi instead, and its was Commander Thy'lek Shran of the IGS Kumari that carpet-bombed the Xindi into submission. (ST - Myriad Universes novel: The Tears of Eridanus)

The author's annotations stated Enterprise launched ten years later due to the lack of Vulcan support after World War III. The construction was finalized under Jonathan Archer, and Bryce Shumar became its captain. Coming a decade late, Andorians became the dominant power by force instead of the Human power-brokers.

In the year 2259 of that timeline, a model of Enterprise was on display on Admiral Alexander Marcus' desk at Starfleet Headquarters. (TOS movie: Star Trek Into Darkness)

In the mirror universe, the ISS Enterprise enforced the brutal rule of the Terran Empire. It was destroyed by Tholians in 2155 during a mission to recover the time-displaced 23rd century Federation Constitution-class starship USS Defiant. (ENT episode: "In a Mirror, Darkly")