For other uses, see Sanctuary.

The Original Series No. 61

From the book jacket
The planet Sanctuary -- a fabled world in unexplored space which is thought to be the last refuge of the persecuted, home to both the justly and unjustly accused. Though its name has been translated into every language in the galaxy, Starfleet has never known its exact location.

When the crew of the USS Enterprise is assigned to capture a dangerous criminal named Auk Rex, their pursuit takes them to an unexplored sector of the space. Captain Kirk, Mr. Spock, and Dr. McCoy continue the pursuit in a shuttlecraft, following Auk Rex to the surface of the planet, Sanctuary. Soon, Kirk and his crew are locked in a life and death stuggle on the mysterious planet, which harbors deadly secrets and never releases its visitors.

In 2268, the USS Enterprise under Captain James T. Kirk was dispatched to find and arrest the infamous pirate Auk-Rex. Auk-rex fled from the Enterprise and was able to reach the planet Sanctuary. A team consisting of Kirk, Spock, and Dr. Leonard McCoy pursued the criminal in a shuttlecraft, but Auk-Rex's craft crash landed and the Enterprise team landed on the planet to search for survivors.

Once on the planet, the shuttlecraft was confiscated by the Senites and Kirk, Spock, and McCoy were trapped on the planet. The three then traveled to the town of Dohama but were unsatisfied with what they saw there. They then traveled by boat across the ocean and reached the island of Khyming. Once there, the trio discovered Auk-Rex and learned her real name- Renna. They learned that Renna's father had also been with her on the ship and that he was in critical condition; eventually he would die from his wounds. After her father's death, Renna decided to help the trio of Starfleet officer's escape from Sanctuary.

In an attempt to access Senite transporters and thus gain freedom from Sanctuary, Kirk, Spock, McCoy, and Renna snuck into a Senite seminary. The four accessed the transporter, but Senite guards came quickly and the team was forced to beam out without changing the coordinates already programmed into the transporter. This led to them transporting back to Dohama where they arrived in the middle of Senites collecting residents for the Reborning procedure.

Kirk, Spock, and McCoy were captured and taken to have the Reborning procedure performed upon them. Renna was able to pose as a Senite and ended up freeing the trio of Starfleet officers and some other Sanctuary residents from captivity. The group then set off to the Graveyard of Lost Ships but were attacked by the Lost Ones on the way there. Eventually the group was able to reach the graveyard, the residents of which helped Kirk, Spock and Mccoy construct a balloon that took them into the atmosphere where the Enterprise was able to transport them to the ship, ending the ordeal. 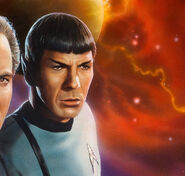 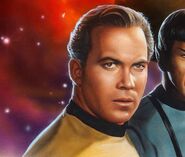