Throughout the history of the universe, there have been multiple timelines, alternate realities and parallel universes that have all contained versions of Sarek.

Sarek, from what is considered the primary universe.
Mirror sarek.jpg
Sarek in the mirror universe. 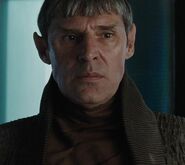 In an alternate timeline caused by time travel to the year 1930, the United States of America failed to declare war against the Nazis due to the influence of isolationist activism, led by the likes of Edith Keeler. This timeline led to the Nazi takeover of Earth, and the rise of the Erdenreich government. Sarek gained prominence in an alliance of forces determined to resist the Nazi menace, which had destroyed many worlds of the Alpha and Beta Quadrants. By the 24th century, resistance against the Nazi Raumwaffe space fleet was failing, as Sarek's leadership became ineffectual due to the degradation of his mind with Bendii Syndrome as he passed the age of 200. (Last Unicorn RPG module: All Our Yesterdays: The Time Travel Sourcebook; TOS episode: "The City on the Edge of Forever")

Retrieved from "https://memory-beta.fandom.com/wiki/Sarek_(alternates)?oldid=663655"
Community content is available under CC-BY-SA unless otherwise noted.