4556.7
"Scaean Gate" is the fourth of five TOS manga stories in the 2007 anthology Kakan ni Shinkou (To Boldly Go). It was published by TokyoPop, written by novelist Diane Duane, and drawn by Don Hudson and Steve Buccellato. In this story, to end interplanetary war, one world’s queen emigrated to the other world amid political intrigue and threat of attack by a mysterious insectoid race.

From the back of the anthology Kakan ni Shinkou
"…an alien delegation uses the Enterprise as a vessel of deception!"

Captain's Log, Stardate 4556.7.
At the Academy, Professor Maher always said that any starship mission that wasn't driven by pure science was probably driven by economics. Our current mission now seems to prove his point. The need for trade has led the warring planets Elethia and Alsand to strike a delicate partnership. The Alsandit royal line has ended and they have asked to be ruled by the Elethian monarch. However, she must live on Alsand for the peace to work. The Enterprise has been ordered to transport the Elethian monarch from her homeworld to her new seat of government; a short distance, but one fraught with potential dangers. Beyond the hostile factions within these two worlds, rumors speak of other perils: Pirates. Scavengers. And a mysterious, and apparently vicious, insectoid alien race known only as the Harst. All of this has soured my mood in regard to our diplomatic assignment. But the dread I feel for the difficulty of this mission is overshadowed by one thing more intrinsically unpleasant to me… the inevitable diplomatic reception.

In the rec room, Kirk, Spock and McCoy introduce themselves to Queen Apathei, who takes an immediate liking to McCoy. Her playful pet thirsk, a small, reptilian-looking animal, jumps on McCoy, then runs off.

Before the Enterprise leaves the Elethian system, three unknown vessels appear at a distance. Built from modular components available on many worlds, they can't be identified, but they have strong shielding.

During a ship's tour, McCoy brings Apathei to engineering, where the pet thirsk grabs an equivocator module, then runs off again. The three alien ships attack. Chekov is able to destroy one with phasers and torpedoes, prompting the remaining ships to withdraw.

Captain's Personal Log…
The Enterprise is a little more than two days out from the planet Alsand. In a matter of hours, a vessel from Alsand will be meeting us to escort us the rest of the way. Since yesterday's attack, we have been running at yellow alert, as I expect another, similar test of our capabilities. At least our unknown assailants will have been left in no doubt of our will and ability to defend ourselves. But the word "test" keeps coming back to haunt me. Were we attacked because that was about when such an attack should have occurred — the time when a prudent command would have expected it? Did our attackers expend no more force than necessary to fulfill our expectations? Were we meant to beat them off as easily as we did… so that we'd assume there would be no further attempts? If that was the purpose, it hasn't worked.

Scotty brings the thirsk back to Apathei, as it has been in the food processing machinery after spending hours in engineering. McCoy tells her about the Greek myth of Helen, a ruler brought to Troy for political reasons, and while no enemy had penetrated the Scaean Gate of the city's high walls, the people were afraid.

Kirk suspects another attack. Spock says the attackers are unlikely to be Harst as they've had little contact with humanoid species, whereas the attacking ships were made of humanoid-manufactured components. Captain Tyren of Alsand arrives for the scheduled rendezvous, reporting his ship has been attacked twice by Harst en route. Beaming over, Apathei approves of the ship as her thirsk again runs off.

Both ships are suddenly under attack by at least seven of the modular alien ships. Apathei runs after her thirsk to save it, and McCoy runs after her to bring her to safety. He finds and scans her thirsk, then sends Spock the readings. Spock determines the creature to be an organic machine programmed to gather detailed technical information. Kirk wonders who the data is meant for — is it a faction on Elethia opposed to the planetary union? Confronting her, McCoy learns that Apathei is betraying the will of the majority of her people, collecting all that data to be used for leverage. McCoy accuses her of making the Enterprise facilitators of her plot, proverbially letting her right through the Troyian gate.

Kirk beams the thirsk to one of the alien ships, where Spock uses it to positively identify the attacking ships as Alsandit. Confronting both Captain Tyren and Queen Apathei of their conspiracy, Apathei claims immunity as a head of state. Kirk points out that, if he publicizes their actions, trade with both their worlds will end, as nobody will trust them. He also suggests the Harst might not appreciate their activity. Kirk suggests that Apathei do as both worlds want: be their queen. As Apathei beams back to the Alsand ship, she asks McCoy if he'll ever forgive her. 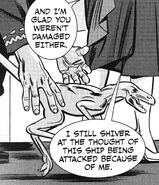 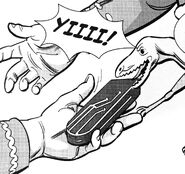 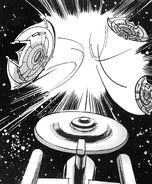 Enterprise and Alsandit escort under attack. 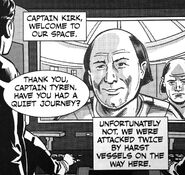