Sceptre of the Sun (comic)

Sceptre of the Sun

1248.6
The Enterprise and her crew are snared in a wizard's magic! — "Sceptre of the Sun" was the tenth issue of the Gold Key Comics TOS series. Published in May 1971, the story was the second written by Len Wein and the eighth drawn by Alberto Giolitti.

Sorcery — black magic — mystic forces from a time long dead — what will happen when Captain James T. Kirk and the crew of the ultra-scientific starship, Enterprise, come to grips with these forces ... while the fate of the Enterprise — and an entire planet hang in the balance?

In a rocky canyon, Kirk, Spock, McCoy and Scotty are set upon by rock giants with huge clubs, on whom phasers have no effect...

Captain's log, star date 12:48.6
We are proceeding through sector Vega 6 toward a rendezvous with Space Ambassador Mason at Star-Base 10 — nothing unusual to report…

Sulu picks up a "nebulous mass" on the viewscreen. The object transforms itself into a gigantic genie, which grasps the Enterprise by its starboard nacelle. Spock's sensors indicate that the genie is merely an illusion. At that moment, however, clouds of smoke appear on the bridge, enveloping Kirk, Spock, McCoy and Scotty, who disappear.

The four men find themselves in the castle of a robed figure named Chang, who claims to have brought them there by sorcery. When Scotty charges Chang, the sorcerer immobilizes him with a wave of his hand. Kirk demands that Chang release Scotty and the others, but Chang says he has much to demand of Kirk. Chang tells the Enterprise officers of the Sceptre of the Sun, a fabled device of great mystic power lying at the foot of a mountain many miles away. Chang claims to be losing a war with a sorcerer named Xandu, who has suspended a gigantic flaming sword over Chang's city. If Kirk and the others do not bring the Sceptre to Chang, the genie will destroy the Enterprise. Chang provides them with a guide, a woman named Marla.

As the five travelers walk through a canyon, Spock senses that the area is too quiet. Suddenly, the canyon walls reform themselves into two stone giants wielding enormous clubs. The five humanoids climb a cliff and take shelter in a crevice, but discover that phasers have no effect on the giants. Kirk and Spock run back out into the open and trick the giants into crashing into each other, destroying them. As night falls the travelers make camp. Marla tells Kirk that Chang came from the northern mountains; her people were peaceful before he used his sorcery to make himself king. The camp is attacked by a band of warriors. A red-bearded man, his arm around Kirk's neck, waves a sword above his head and tells them to stop, or the captain dies...

Captain's log, star date 12:48.9
Officers Spock, Scott, McCoy and I have been mysteriously transported to a planet still in its dark ages to do the bidding of the black wizard called Chang! While seeking the secret sanctuary of the mystical Sceptre of the Sun, we have been attacked and overpowered by a band of barbarians who have threatened us with surrender or death…

Kirk surrenders, and the red-bearded warrior, Brand, apologizes for the violence. Brand, his followers and Chang come from Earth in the year 1997. They belonged to a peace movement during the Eugenics War. Accepting their defeat, they left Earth in a spaceship and traveled in suspended animation until their ship's sensors discovered this planet. The humans dismantled their rocket and mingled with the planet's primitive people, but Chang traveled to the mountains in search of adventure. Months later, Chang returned in royal robes, carried by slaves on a sedan chair, and used his newfound mystic powers to force Brand and the others to obey him. One of Chang's guards is a spy for Brand's group and told them of Kirk's quest for the Sceptre. Brand believes his people can use the Sceptre to overthrow Chang. Outnumbered, Kirk has no choice but to take Brand and his followers along.

Miles later, the travelers find the Sceptre of the Sun, standing upright in a niche between statues. When Kirk takes the Sceptre, a giant robot appears to defend it. The Sceptre has no effect on the robot, confirming Spock's concerns. The Vulcan asks the others to distract the robot for him while he climbs a hill and jumps onto the robot's back. He rips out a set of wires and jumps off as the robot electrocutes itself. Kirk is still puzzled that the Sceptre did not work.

As they return to Chang's castle through a lightning storm, Scotty points out a beam of light rising from the building; Kirk is afraid he knows what it is. They defeat the guards and enter the castle, where Chang is standing in front of a screen showing the Enterprise trapped in the beam of light, a tractor beam dragging it down to the planet, where Chang can take control of it. Kirk warns Chang that the ship is not designed to land on a planet and will burn up in the atmosphere. Chang does not believe him, and makes a giant baboon-like creature appear to attack Spock… who walks through the creature. He reveals that Chang is a fraud: everything they have seen — the war with "Xandu," the flaming sword, the stone giants, the robot – were illusions. Chang's real plan was to keep the command officers off the Enterprise long enough to take it over with his powers of illusion.

Chang orders his guards to kill Kirk and the others, then tries to escape. Kirk pursues him onto the castle ramparts, where Chang raises his sword above his head to strike Kirk down; a lightning bolt strikes the sword and kills Chang. Spock and Scotty are unable to destroy Chang's tractor beam device. Kirk evacuates the castle, contacts Sulu and orders him to use the ship's phaser banks to destroy the castle, saving the Enterprise. Back on the bridge, Spock points out that, had Chang been more patient, he could have built his own spaceship and conquered the galaxy. Kirk expresses the hope that Chang's secrets have truly died with him. 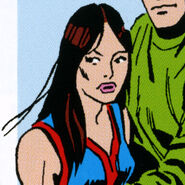 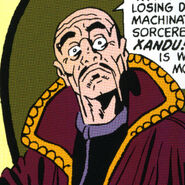 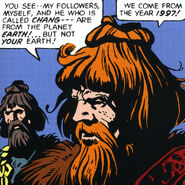