2269
Second Nature is a 2014 Star Trek: Seekers novel (the first novel of the series) by David Mack.

A new mission: The late twenty-third century–Starfleet’s golden age of exploration. Desperate to stay one step ahead of its rivals, the Federation sends two starships, the scout Sagittarius and the cruiser Endeavour, to plumb the secrets of the vast region known as the Taurus Reach.

A doomed race: Drawn by mysterious energy readings to a lush green world, the crew of the Sagittarius find the Tomol: a species whose members all commit ritual suicide just as they reach the cusp of adulthood.

An old foe: The crew of the Sagittarius wants to save the Tomol from their cycle of self-destruction, but first they’ll need to save themselves–from the most nefarious Klingon starship commander in history.

Nereus II is a lush world populated only by a small primitive humanoid population living on the largest of several islands. Every member of their species undergoes a dramatic Change at the age of 18, gaining dangerous powers and losing their mind, and they are expected to throw themselves into an eternal flame to save the rest of their society from harm. Nimur, on the cusp of the Change herself, questions the wisdom of the priestess and the ancient traditions. She doesn’t want to abandon her newborn daughter, Tahna, or to throw her life away just as she reaches the next great stage of her existence.

The USS Sagittarius crew adjusts to some new dynamics. Lt Commander Vanessa Theriault has been promoted to Captain Clark Terrell’s XO, and several new officers have joined the ship—Lt Sengar Hesh, an Arkenite science officer, and the Kaferian insectoid helm officer Ensign Nizsk. They investigate strange energy readings coming from Nereus II, but find only the primitive Tomol. The ship deposits a landing party in Vixen, a skimmer retrofit to function as a submersible, to covertly observe the Tomol and to locate the energy source. Theriault, Hesh, nurse Nguyen Tan Bao, and Trill scout Lt Faro Dastin locate the village and follow the Tomol to their ceremonial grounds. They witness several people sacrificing themselves in the fire and scans reveal that the Tomol are not native to this planet.

Despite the counsel of high priestess Ysan and the fear she experiences from her mate, Kerlo, Nimur refuses to go through with the Cleansing. She uses her burgeoning powers to incapacitate the Wardens (guards) with a psychic blast, takes her child, and flees into the wilderness. A covert Klingon scouting party helps Nimur escape and promises to take her somewhere safe, though they are only interested in securing her as a test subject and weaponizing her powers. When she begins to resist them, Commander Tobar threatens to kill her child. They take shelter in the Tomol’s sacred caves until Nimur is pushed too far and retaliates. Only the Klingon scientist Tormog escapes being eviscerated by her mental fury.

The Starfleet team tracks the Klingons but is discovered by Ysan, her student Seta, and the Wardens, in pursuit of Nimur. Though the Tomol are suspicious, they agree to work together to deal with both threats. The Wardens confront Nimur, though they fare no better than the Klingons. She kills them and Ysan, abandons her child, having grown beyond her. Theriault’s party and Seta explore deeper into the caves, hoping to find a solution to their problem on the ancient Wordstone within. They discover that the stone is actually a Preserver obelisk—likely designed to protect the transplanted Tomol, and the source of the strange energy readings. They activate the device, hoping it will incapacitate Nimur, but flee the caves when it appears unstable. They head for the village, capturing Tormog along the way.

In orbit, the Sagittarius observes the approach of a Klingon battlecruiser, Captain Kang’s Voh’tahk, and a bird-of-prey, Captain Durak’s Homghor. The ship hides on an orbiting asteroid and calls the Endeavour for assistance. Dr. Babitz studies the landing party’s scans and discovers that the Change is caused by elements of the Shedai Meta-Genome added to the Tomol’s DNA centuries earlier. She insists that they have a duty to intervene and save the Tomol from this lethal outside influence, but she can’t remove the Shedai sequences without killing the patient. With the Endeavour still en route, the Sagittarius is forced to confront the two superior Klingon ships to prevent them from securing any Tomol test subjects.

Nimur returns to the village and calls for allies. Everyone resists until she forcibly Changes ten of the Wardens, making them her entourage. Theriault’s team exhausts or destroys their phasers in unsuccessful efforts to stop the Changed, but only succeed in getting the incensed gods to chase them, and then only escape when a second Klingon landing party engages, and is obliterated by, the Changed. The Starfleet party reaches the hidden Vixen and escapes the main island, while Tormog escapes from them and contacts the Voh’tahk. He urges Kang to abandon his quarry before they all die, but is ignored.

The Sagittarius faces off against the Klingon ships and plays a game of cat-and-mouse in the planet's rings. Durak captures all eleven of the Changed via transporter, again inadvertently saving Theriault’s team, but his crew is no match for the powerful beings. Nimur easily rips the Klingons apart, only keeping Durak alive to torture him for the knowledge of controlling his ship. He eventually surrenders the operation of the autopilot before dying badly. Terrell observes the Homghor’s erratic maneuvers and realizes that Nimur has taken the ship, vowing to stop it from leaving the system. The Sagittarius is able to shoot down the bird-of-prey, but is crucially damaged itself by the Voh’tahk and both smaller ships plummet towards the planet’s surface. Only a miracle pulled off by Master Chief Ilucci and his engineering crew allows the Sagittarius to soft-land without massive damage or any casualties. Vixen rendezvouses with its mother ship at the crash site.

The Endeavour arrives and Captain Khatami convinces Kang to back down long enough to get both of their personnel off the surface. Tormog tries to secure a Tomol test subject pre-Change, but fails. The Homghor is incinerated when it impacts the planet, but the Changed crawl out of the wreckage and claim dominion over everyone and everything on Nereus II. Nimur captures Tormog and informs both orbiting starships of her decree, ordering them to leave.

Arkenites live in social groups called sia lenthars. Historically, these were composed of basic professions—healers, artisans, and the like, but through generations of intermarriage, they came to prize diversity.

Offworld, Arkenites wear an anlac’ven—a headset that helps them retain their balance in non-aquatic environments.

The insectoid Kaferians sleep each night within a cocoon that fills with a regenerative fluid. Upon awakening and emerging, that fluid is expelled messily. 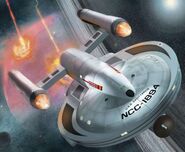 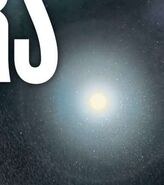