59641.5-59663.4
Seize the Fire is a Star Trek: Titan novel by Michael A. Martin published by Pocket Books in December 2010. It is the second novel in the Star Trek: Typhon Pact cross-over series and centers around the Titan crew struggling with a Gorn crew over control of a terraforming artefact.

Shortly after revealing its union with the Federation's newest adversary—a coalition of galactic powers known as the Typhon Pact—the Gorn Hegemony suffers an ecological disaster that destroys the hatchery world of their critically important warrior caste. Fortunately, the Gorn had already been investigating traces of an ancient but powerful "quick terraforming" technology left behind by a long-vanished civilization. This technology, should it prove controllable, promises to restore their delicate biological and social status quo. But when a Gorn soldier prepares to use the technology to reshape the planet Hranrar into a new warrior-caste spawning ground, threatening to extinguish the native Hranrarii, he draws the unwanted attention of a mad Gorn trooper determined to bring the military caste into dominance.

Meanwhile, as the USS Titan embarks upon a search for this potent technology in the hope of using it to heal the wounds the Federation sustained during the recent Borg crisis, Captain Riker must balance his responsibility for his crew's safety against the welfare of the Hranrarii and his duty to the Prime Directive. With a menacing Typhon Pact fleet nipping at his heels, Riker must not only stop the Gorn warriors but also plumb the secrets of an ancient terraforming artifact. But of everyone serving aboard Titan, Commander Tuvok may be the only one who understands how dangerous such planet-altering technology can be, even when used with the best of intentions. . . .

A disaster destroys the planet Sazssgrerrn, home of the sole hatchery belonging to the Gorn warrior caste. The few survivors are badly wounded by radiation; one of them, Gog'resssh, goes rogue and steals the ship S'alath to secure a new crèche-world for his cast.

The Titan is surveying a life-less, though M-class, planet. The crew believes the planet's life supporting environment was created artificially, as is the case of several other worlds in the local Vela OB2 Association, because nothing on the planet could have produced and be maintaining the planet's atmosphere. Riker names the planet “Doornail.” Titan leaves to find the terraforming technology.

Gorn scientist S'syrixx is searching for a new crecheworld; his mate, Z'shezhira disappeared with the S'alath. His flotilla discovers a large ancient structure resembling a flat platform with a single tower-like projection floating in space which appears to be responsible for terraforming planets in the sector. They soon begin testing its terraforming abilities after which they intend to use it on the inhabited planet of Hranrar (also known as Vela OB2-404 II). S'syrixx is disturbed that the warrior and political castes have approved of destroying this planet. Meanwhile Titan is on the trail of the Gorn fleet and their newly acquired ecosculpter.

Titan finds the Gorn fleet at Hranrar and is immediately told to leave by Captain Krassrr, who has claimed to have annexed the system. Titan retreats to the outer edge of the system. Riker wants to prevent the Gorn from using the ecosculpter on an inhabited planet and supplying a potential weapon to the Typhon Pact.

Noah Powell coins the name Brahma-Shiva for the ecosculpter. As the Gorn power up the machine to terraform the planet, the Titan crew wants to destroy the ecosculpter and flee the system before the Gorn can react. Riker says they have no authority to do so outside Federation space, that such an act could bring them to war with the Typhon Pact, would violate the Prime Directive, and they would be relentlessly pursued by the Gorn.

S'syrixx sabotages the ecosculpter to prevent the immediate genocide of the inhabitants of Hranrar for which he is arrested for treason. An attempt at diplomacy with the Gorn fails. Captain Krassrr expresses misgivings about destroying Hranrar but basically says it is a kill or be killed situation. S'syrixx is executed by being flushed out an airlock but the Titan crew transports the body moments later and is able to revive him. His biology is strange to the crew as Starfleet has only had dealing with the complex-eyed political and warrior castes. He requests asylum, which Riker later grants. Qur Qontallium a reptilian security officer from the planet Gnala, allows S'syrixx to share his quarters; S'syrixx warms to Qur when he explains how he lost his mate fighting the Borg.

Gog'resssh becomes more unstable from the radiation poisoning; he wants to capture the ecosculpter, wage war against the other Gorn castes, and institute a military oligarchy.

Titan sends a way team consisting of Vale, Troi, Dakal, Bolaji, Modan, and Evesh to the planet surface with personal holographic camouflage to gather reconnaissance about the native culture. Dakal taps an organic communication node at a distribution station, which accidentally kills it. When the away team returns to their shuttle, they are attacked by a Gorn fighter. The away team returns to the surface and Vale sets the shuttle to collide with the Gorn vessel, destroying them both and stranding the away team. Not long after beaming down, they are captured by the Hranrarii.

The Titan crew discover the inhabitants of Hranrar use matter/antimatter annihilation to power their cities. Reasoning that this technology means the natives are warp-capable despite them having no space program, Riker and company decide that intervening with them would not violate the Prime Directive.

When Titan come sunder fire from Krassrr, the crew fakes its destruction in a firey entry into the Hranrar atmosphere and hides in the magnetic disruption above the northern pole. The S'alath is already hiding in the northern magnetic pole, a doxen klicks below Titan. Gog'resssh contacts Riker to join him in taking the ecosculpter away from the Gorn fleet.

The Hranrarii take the away team to the local police where they are charged with killing a living data node. Vale tells the magistrate they are explorers who have come to the planet because it is facing destruction. The Hranrarii have been able to see the ecosculpter in orbit but been unaware of its purpose. The away team is left on a high rooftop as their fate is decided.

Unknown to anyone, the ecosculpter is conscious, has been monitoring the activities of Titan and the Gorn, and was disrupting communications around the solar system. S'syrixx has been aware of the machine's sentience and tells Riker the machine possesses the spirit of S'Yahazah the Egg Bringer- the Gorn goddess of fertility and egg hatching, their primary deity. S'syrixx believes S'Yahazah has been intermittedly interacting with events to promote a peaceful outcome.

Riker sends an away team to try to contact S'Yahazah and destroy the ecosculpter if necessary. Gog'resssh then forces Riker to beam aboard the S'alath where he is taken prisoner. Z'shezhira beams herself and Riker aboard an escape pod and flies to Titan.

Gog'resssh realizes his plans for a new warrior caste have failed and tries to destroy the ecosculpter. Titan swoops in to defend the ecosculpter and the away team aboard it. Krassrr takes no chances and moves to attack both ships.

Aboard the ecosculpter, the away team tries to download S'Yahazah and destroy the machine. When they have no data modules large enough for the download, White-Blue volunteers himself as a carrier vessel. White-Blue crash-shuts down during the download. The away team returns to Titan leaving Tuvok to attempt a mind meld.

Gog'resssh tries to ram the ecosculpter but Titan holds the S'alath in a tractor beam, which begins to burn out. Krassrr also tractors the S'alath. Tuvok concludes his meld but is left unconscious and is beamed back to the ship after which Riker allows Titan's tractor beam to burn out. The S'alath collides with the ecoscultpter at near warp velocity, destroying both. With the ecoscupter destroyed, the away team on the planet is free to beam up. Vale leaves a subspace transceiver with the Hranrarii in the event the passive isolationists desire further communication with the Federation.

Riker negotiates a peaceful resolution with Krassrr. S'syrixx, Z'shezhira, and doctor R'rerrgran, who earlier collaborated with S'syrixx, are banished from among the Gorn to Hranrar. The Hranrarii allow the 3 Gorn to stay. Titan leaves the system before the combined Typhon Pact fleet arrives.

Ensign Torvig spends 4 days trying to wake up White-Blue. When White-Blue comes back online Torvig says, “Finally. The nightmare is over.” White-Blue responds, “No. It may just be beginning.”

Tuvok awakens around the same time. He has gained extensive knowledge about the construction of the ecosculpter and terraforming. However, he is unsure if he wishes to reveal this knowledge as it could be used to restore Borg ravaged worlds or could be used to build weapons of mass destruction. 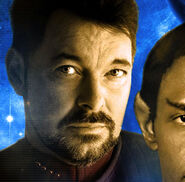 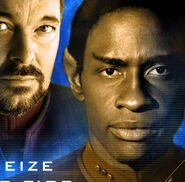 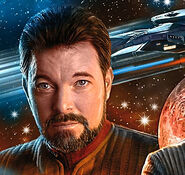 The novel is set in February of 2381 and August of 2382. It begins one year and three months after the final TNG movie: Star Trek Nemesis.