Send in the Clones

Send in the Clones

The Original Series (US Comic Strips) No. 16

9580.03-9588.9
Send in the Clones is a Star Trek: The Original Series comic strip by Gerry Conway. It is the 16th story in the US Comic Strips series, published in newspapers over a period of 14 weeks by the Los Angeles Times Syndicate. This story depicts events after Captain Kirk's second five-year mission but before TOS movie: The Wrath of Khan. In this story, Admiral Kirk returns to the USS Enterprise and assumes command to ferry a pair of courier clones on a diplomatic mission to end a war.

In San Francisco on stardate 9580.03, Admiral Yaramoto cut short Kirk’s vacation and assigned him temporary command of the Enterprise for a critical diplomatic mission. Kirk was to bring two clones bearing a peace message to Sangdor, hoping to end their hostilities with the Federation. The message was genetically-encoded into the cells of the clones, said to be the most secure way to deliver sensitive information, and would be decoded when the clones met their original on Sangdor.

Captain’s log, stardate 9581.40.
The Enterprise is en route to the Sangdor Principality, bearing a message of peace. … but peace, it seems, is far from the minds of certain crew members.

Scott reacted with extreme prejudice to seeing the clones, calling them heathen monsters. The clones, both named Lyssa, said prejudice like Scott’s was not unusual. They were bred to be stronger than normal humans.

Captain’s log.
Feigning ignorance, I questioned the courier clones about their peculiar branch of the diplomatic corps… Hoping to learn the reason for Scotty’s hostility toward them since he seems too angry to speak lucidly on the subject.
Captain’s log, stardate 9782.87 (sic).
I’ve just learned the tragic reason behind Commander Scott’s hatred of our passengers, two diplomatic clones…

Two clones were grown from brain tissue of the original diplomat. Each of the three has a third of a diplomatic code encoded in their DNA, and only when combined was the full message able to be decoded. Scott’s nephew Brian volunteered for this duty, but had died during the cloning procedure. Scott felt that the corps killed Brian, so he blamed them all.

The Enterprise was fired on as it entered the zone, then held in a tractor as a Sangdor warship attempted to ram them. Scott had left his post when the clones visited Engineering, but his backup was able to divert extra power and avoid the collision.

Ensign Flynn discovered Scott in the clones’ cabin, holding a knife over the body of one of the clones. The other clone was nearby and appeared catatonic. Scott said he’d gone there to warn them not to enter secure areas of the ship, but was hit from behind and knocked out when he entered the cabin. He awoke to see the dead clone, with a knife in his hand.

Stardate 9587.2.
Power levels dangerously low, the Enterprise stands dead in space… for all intents and purposes, completely vulnerable to the next sally of the Sangdor Picket Ship…

The clone had feigned catatonia. In reality, she hadn’t adapted to her shared life, and stabbed her clone sister out of jealousy. Lyssa-2 fled sickbay after the mind-meld, but she was stopped and stunned before she could kill Scott.

Captain’s log, stardate 9588.8.
Face to face with the commander of the Sangdor picket ship…
Captain’s log, stardate 9588.9.
Spock is attempting to break the diplomatic cipher which keeps the Federation’s peace message locked away in this unconscious clone’s genetic code… a feat which may well prove impossible. If Spock fails, war between the Federation and the Sangdor Principality will continue…with the Enterprise as the next casualty. I can only hope…

Spock deciphered the message and relayed it to the Sangdor commander, who immediately withdrew to contact superiors. Kirk was confident that a treaty would be signed within a month. 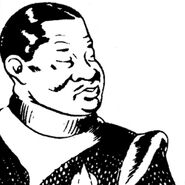 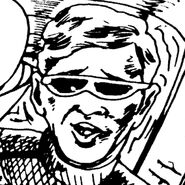 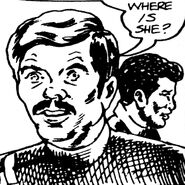 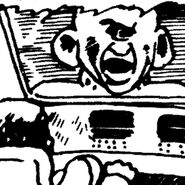