The Original Series No. 22

1831.5
Spock and Sulu are swept into a savage power struggle on a primitive, beautiful world!

When Sulu and Spock accompany Vikram home, they walk into a bloodbath: reactionary forces, afraid of any modernization, have seized Vikram's rightul throne.

Suddenly, the men from the Enterprise are on an underground journey with a prince who is coming of age. The future of Angira is at stake, and each man's survival depends on his skill—and daring—with a sword!

The Enterprise has been assigned to escort Vikram, a minor member of the Angiran royal family who has been being educated in the Federation, back to his home planet. Spock and Sulu accompany Vikram to the planet to provide them with astronomical information while the Enterprise continues on to deliver medical supplies to Beta Carinae.

When they arrive, the trio discover that the emperor's plans for modernization have caused widespread discontent: many of the population are forced to work in dangerous factories, there is wide-scale pollution and the new taxes have left many on the verge of starvation. Lord Rahu, an old rival of Vikram, stages a coup, wiping out most of the royal family and leaving Vikram as heir apparent, but Spock, Sulu and Vikram manage to escape the palace in the company of Urmi, the niece of Vikram's servant Bibil, who is killed aiding their escape.

The group makes for Urmi's home village of Guh but Spock is wounded in an attack by bandits led by the disinherited Lord Tayu. When the villagers attempt to hold them prisoner, resentful of the emperor, the others are forced to leave Spock behind with Urmi's grandfather Pagu. The pair are then captured by Lord Bhima, a swordmaster and former mentor of Vikram who has reluctantly agreed to serve Rahu.

Sulu, Vikram and Urmi reach Vikram's family's fortress at Kotah and, despite the Council of Elders trying to hold on to power for themselves, Vikram is able to convince the people to fight for him and form an army. They engage Rahu's forces and manage to wipe out his swordsmen with volley fire, with Sulu briefly taking charge of the field when Vikram is knocked unconscious. With his army in flight, Rahu attempts to escape by holding Spock and Pagu hostage. Vikram challenges him to a duel instead but Rahu instructs Bhima to fight in his place and Vikram mortally wounds him with a trick he learned from Sulu. Rahu orders his remaining follower to kill Vikram but Bhima takes the arrow instead and Rahu is killed by Vikram's men.

Later, having convinced Starfleet that their actions did not violate the Prime Directive, Spock and Sulu return to the Enterprise leaving behind Federation advisers to help Vikram and Urmi arrange a fair modernization of the planet. 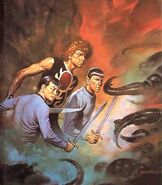