Shadows of the Past

Shadows of the Past

c. 2248
"Shadows of the Past" is the fourth issue of John Byrne's TOS Crew miniseries, released by IDW Publishing in June 2009. It takes place circa 2248 and features Christopher Pike's first mission aboard the USS Enterprise under the command of Captain Robert April. It also continues the story of a group of cloned Earth soldiers last seen in TOS - Star Trek: Assignment: Earth comic: "My Name Is Legion".

From solicitations
It's a war that has raged for decades but who are the combatants, and what is their unexpected connection to the Earth of centuries past? The crew of the USS Enterprise will have only hours to find out, or die trying!

A Federation shuttlecraft transfers newly assigned crewmembers, including Christopher Pike and Number One, to the USS Enterprise under the command of Captain Robert April. The ship encounters turbulence when it passes through a powerful transporter beam. The beam's end point is traced to planet Alpha Tau IV and Captain April orders the ship to investigate.

A landing party led by Lieutenant Commander Pike beams to the planet's surface, but two of the party, Science officer Dorak Luabba and Ensign Reed, are killed by primitive traps. Pike orders an emergency transport of the remaining three crew back to the ship. Aboard the Enterprise, they discover five nearly identical settlements of human beings and decide to beam down into one of the settlements to investigate. Once in the settlement, they discover the tribal humans speak English, but then another tribe attacks and abducts Number One. Doctor Sarah April brings down one of the attackers and they transport back to the Enterprise to find out where Number One has been taken.

On the planet, Number One is told that all the tribesmen are clones created to fight in the southeast Asia wars by Dr. Eugene Eckhart back in the 1960s on Earth. The plan was foiled by Gary Seven and Roberta Lincoln, and all 250 of the clones were transported to Alpha Tau IV where they formed the five settlements and made war on each other. Suddenly, Pike and Ensign Baker appear, stun the tribesmen holding Number One and the three of them escape into the trees. Before they reach the transport site, Baker is shot with an arrow. He's unable to be beamed up due to elements within the arrowhead that interfere with the transporter, so Dr. April beams down, removes the arrowhead, then they all beam back up.

Aboard ship, Captain April had contacted Earth Central Command, and shows Pike and Number One a message from Admiral Jorgenson. Much to Number One's consternation, the Enterprise is to leave the planet and resume its exploration duties while observer ships from the nearest starbase monitor the tribes.

Pike finds Number one researching into Robert Lincoln. She tells him that when Roberta was in her seventies, her granddaughter began publishing a series of novels based on the stories her grandmother told her. When asked about the stories, Roberta just said her granddaughter had a very active imagination. After she died it was revealed that the stories were true, but incomplete, and Roberta's death was just conjecture. Number One tells Pike that Roberta disappeared just before her ninety-first birthday - Her neighbour was the last person to see her as she walked off into the twilight one evening holding a black cat.

Christopher Pike and Number One. 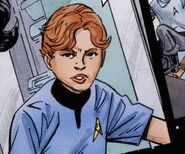 This issue takes place shortly after the epilogue of "Ghosts". It is stated to occur five years after "Shakedown", and three years before "The Ends of Eternity". As the latter also takes place during Robert April's captaincy of the Enterprise (which concluded in 2251) this story takes place in approximately 2248.