This article is about the TOS comic. You may be looking for the TOS novel: Shell Game.

unknown
"Shell Game" was a 32-page TOS comic strip. It was the 36th weekly story arc in the UK comic strips series, published in 16 installments in Valiant and TV21 in 1973. In this story, James T. Kirk rescued the leader of the Sklurrians from a Romulan-held planet.

Teaser, 25 August 1973
Captured by hostile Romulans, Captain Kirk and "the Shell Supreme" — ruler of the strange snail-beings of Sklurr — were taken to the colonized planet Karr and put in the arena to face a savage monster! To the delight of the Romulan Emperor and the howling mob, they fought with cunning success ... but they were only playing for time!

Following a space battle with several D7-class Klingon battlecruisers, the USS Enterprise resumes its mission of exploration in the Tharkian sector without defensive missiles. A sister-ship is en-route to resupply them, and Kirk plans to rebuild the ship's defenses in the next system. As the Enterprise approaches the star Danae Victoria, it is accosted by a probe in orbit of the 12th planet. Kirk destroys the probe with phasers, then sensors locate a nearby derelict. Boarding it, they discover several large snail-like beings who had been killed by a similar attack that had vibrated them to death. The Enterprise is then hailed from neighboring planet Karr in the Romulan language — they ask why their probe had been shot down, then fire interplanetary missiles at the starship. Kirk realizes that Romulans had occupied Karr and were using probes to blockade the 12th planet.

On the surface below, natives think the new visitor must be Karrian or Romulan, so they launch a weapon containing a molten plastic that envelops the Enterprise and causes life support failure. But their leader realizes that the starship might be friendly and chooses to investigate aboard his command ship, and after communications are established, the Sklurrians remove the enveloping plastic. The Shell Supreme and his aides leave their ship in pressurized spheres to board the Enterprise through an airlock. But a Romulan battlecruiser approaches and targets the defenseless Sklurrians. Kirk quickly intercepts them with a shuttlecraft, letting them board through the shuttle's airlock. But Romulan missiles disable the shuttle, and before the Enterprise can return fire with phasers, the Romulans have gassed the shuttle's occupants and taken them hostage.

Waking in the brig of the battlecruiser, Kirk communicates a plan to Spock via telepathy. As the prisoners are offloaded on Karr, Spock beams down in disguise to track them down. Local Karrians cheer as the Romulans take their prisoners to an arena to fight against a giant two-legged dinosaur. The Shell Supreme's aides are terrified, and when they try to flee, they are shot down by Karrian guards. While the Romulan emperor himself watches, Kirk and Shell Supreme are put in the arena. They cunningly evade the dinosaur, stalling for time. Spock jumps into the arena with a targeting device so they can be beamed up, but when it doesn't work, he hands Kirk a type-2 phaser. Kirk fires at the creature's neck and the beast collapses. Thanks to the phaser, the three are able to flee the arena and hide in an abandoned building to give Spock time to repair the targeting device.

The Romulan commander orders Karrians to hunt the escaped prisoners with a terrastron, a three-headed dog bred for tracking. Shell Supreme recognizes the animal's howls and urges them to flee, with Kirk and Spock sometimes riding atop the giant snail's hover platform to avoid leaving a scent trail along the ground. They also set a building on fire before escaping into a forest, which eventually gives way to grassy plains and then a wet marsh, but the howls continue behind them.

Meanwhile, several raiders engage the Enterprise. Over his communicator, Spock advises acting captain Montgomery Scott to fake a surrender in order to trap the raiders. Scott surrenders, and the Romulans order the ship's officers to disembark into space wearing environmental suits. As they seem to comply, a group of Romulans jet into space aiming to execute the officers. But the Starfleet spacesuits are empty, and the Enterprise then destroys the four raiders with phasers. Now free to help those on the surface, Scott sends Hikaru Sulu down with a shuttlecraft.

In the marsh, with the terrastron closing in, Kirk and Spock again climb onto Shell Supreme's hover platform, this time to cross a body of water. The guards sneer that this won't deter the beast. Luckily, at that moment a large, carnivorous, four-legged dinosaur spots the terrastron and chases it. They battle, and the dinosaur wins. As it starts to chase the three fugitives, the shuttle arrives. Sulu helps Kirk, Spock and Shell Supreme to climb aboard just in time. Shell Supreme says that events have united them, and Kirk hopes that the Sklurrians will join the Federation.

Other early appearances of the Romulans:

Arena combat was also featured in:

Shell Supreme and James T. Kirk vs. a dinosaur. 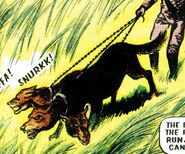 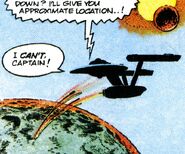 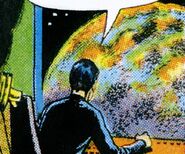