Ship of the Line

For other uses, see Ships of the Line.

Ship of the Line

The Starship Enterprise 1701-D has been destroyed, and Captain Jean-Luc Picard finds himself without a command. While waiting for his new ship, Captain Picard has gone with Lieutenant Commander Worf on a delicate diplomatic mission to the Cardassian Empire.

As Picard conducts high-level negotiations for the return of Federation prisoners of war, the Starship Enterprise 1701-E is being constructed under the supervision of Captain Morgan Bateson, a veteran of the twenty-third century who spent nearly ninety years in a pocket universe. Commanding this new Enterprise on what was supposed to be a short shakedown cruise, Captain Bateson has an idea of his own. In defiance of Starfleet Command, he will take Starfleet's newest, strongest ship and strike at the heart of the newly aggressive Klingon Empire.

Captain Picard's negotiations proceed smoothly -- until he discovers that a hate-crazed Klingon commander -- Captain Bateson's archenemy from ninety years ago -- has taken the Enterprise from Bateson and launched a vicious attack on Cardassia Prime. To save the ship and preserve intergalactic peace, Picard must ally himself with his former Cardassian torturer, rely on the legendary skills of one Montgomery Scott, and draw new strength and inspiration from the memory of James T. Kirk...

Ship of the Line reveals an unforgettable lost chapter in the ongoing saga of Star Trek that will thrill readers of every generation.

In 2278, Klingon commander Kozara attempts to invade Federation space and destroy Starbase 12. In the Fries-Posnikoff Sector, the newly refitted Enterprise rendezvous with the USS Bozeman to transfer 2 bridge specialists- Mike Dennis and John Wolfe. Captain Bateson declares the Enterprise a ship of the line. After the Enterprise leaves to face a Klingon ruse, the Bozeman comes across Kozara's warship. Kozara and Bateson are old enemies. The Bozeman is massively outgunned and tries to keep the Klingons busy to buy time but know they will ultimately be destroyed. During the pursuit, the Bozeman launches a signal buoy set to send out a warning half an hour later then tries to hide in an unknown energy cloud. Entering the cloud, the battered Bozeman loses power and engine control, and was presumed lost.

The Bozeman was not lost, however, but had encountered a temporal distortion in the Typhon Expanse. It was transported forward in time to the year 2368, when it was found by the Enterprise-D. (TNG: Cause and Effect)

Three years later, Picard is brooding over the loss of his second ship at Starbase 12 where the Bozeman is now a museum ship and Bateson presides over construction of the 1701-E. Meanwhile, Kozara returns from a 90 year exile and is greeted by his son, Zaidan, who tells him about Bateson's return, leaving Kozara without a single victory in his life. Zaidan then disowns his father. Kozara swears to kill Bateson and "vilify the name of Enterprise."

Aboard the Enterprise-E, Bateson is completing construction, micromanaging the crew which includes the former Bozeman crew and Montgomery Scott. Meanwhile, Admiral Farrow assigns Picard to a mission to Cardassia rescuing Starfleet POWs from Gul Madred along with Crusher and Worf.

Riker has been appointed first officer of the Enterprise while the Bozeman's first officer, Gabriel "Gabe" Bush, is second officer. Bush has become an alcoholic after learning his fiancée from 90 years ago crossed into Klingon space after his disappearance looking for him, was captured, sent to Rura Penthe, and her remains sent home in ten pieces. For a shakedown cruise, Bateson takes the Enterprise into the Typhon Expanse along the Klingon border for war games. When Riker becomes uneasy with Bateson's leadership, the captain shows him that part of the bridge science station and the forward support struts show minor damage because they are from the wreckage of the 1701-D; the officer's lounge table was also reclaimed from the -D. Bateson says because of these artifacts, the crew of the -E will always know of the legacy of her predecessor.

On course to Cardassia, Picard spends time on the holodeck, observing and conversing with Kirk during the events of "Balance of Terror" and "The Enemy Within". During this time, Picard learns sometimes fighting has to be the first option rather than diplomacy and a captain has to be both an intellectual and a warrior. Aboard the Enterprise, Riker has an argument with Bateson on the bridge and in front of the crew over the folly of possibly provoking the Klingons. Soon, they enter the game with shields and phasers locked at minimal power and are quickly outgunned by Kozara in a small Klingon vessel due to a saboteur onboard who turns out to be John Wolfe, a 23rd century Klingon spy. The Enterprise crew is disabled when stun grenades are beamed aboard; the crew is then transferred to Kozara's ship or locked up aboard the Enterprise. Kozara then takes the ship to attack Cardassia prime.

Due to his holodeck experience, Picard opts to take a tactical rather than diplomatic approach with Madred. Revealing that Madred's daughter aided Picard and worried for her safety, Madred releases his prisoners. She tells him she was disgusted with his work and wanted to show that not all Cardassians were unprincipled. Picard is then warned that the -E is heading for Cardassia Prime. Due to the Klingon-Cardassian War, the planet is defenseless, leaving Picard, the POWs, and their ships the only defense.

Bateson, Riker, and Scotty escape and disable some Klingon guards by leading them into a holodeck, programming it to become a chicken farm slick with chicken guano and locking them in. Engineering is secured by flooding the compartment with an obnoxious odor, then tying up the Klingons while they are incapacitated by the smell. A third group is secured by tampering with the gravity controls in a hallway, slamming them into walls before locking them in a room. They then storm the bridge but are captured just before Picard's rag tag fleet starts to attack. Before the battle can engage, Bateson admits to Kozara that he was finally defeated by the Klingon when the ship was taken telling Kozara that he respected him as a warrior and a leader. Zaidan continues to berate his father for ruining his life. Moved by Bateson's respect and humility while tired of his son's whining, Kozara stands down and permits Picard to beam aboard. Bateson hands command to Picard for retaking the ship he lost. Kozara's ship, which had been set adrift earlier, arrives at the scenes under the command of Gabe Bush who got the ship flying and sought to retake the Enterprise. Swearing no further hostilities, Kozara is allowed to return home with his crew aboard his ship to face repercussions.

Due to the incident, the Klingons are embarrassed and stall their hostilities with the Federation. Picard is given command of the Enterprise by Starfleet. Bateson and his former crew are assigned to the USS Roderick which is redesignated USS Bozeman NCC-1941-A. The next year, as the Bozeman faces a Borg cube and the Enterprise heads to the battle, Picard realizes the need to learn from the determination and self-reliance of Kirk, Bateson, and other captains of the previous century. 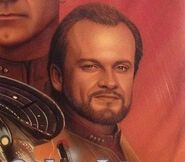 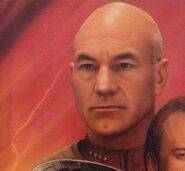