Enterprise, The Original Series, The Next Generation, Deep Space Nine

The USS Enterprise-A is entering a space dock. In the background, there is the USS Excelsior and an unnamed Miranda class starship. This image is later animated for drex-tv01. In the animation, the animator added a second Miranda-class starship and a Valley Forge type starship. This new class is seen later in the calendar.

The USS Enterprise is traveling past an asteroid.

The USS Kelvin (NCC-0514) is passing through a planetary system.

A Romulan starship of a new class is in fleet maneuvers with two D'deridex class warbirds.

In 2285, the USS Enterprise is firing phasers at the commandeered USS Reliant (NCC-1864).

The alternate reality USS Enterprise is leaving spacedock in orbit of Earth. The starships USS Mayflower (NCC-1621), USS Armstrong (NCC-1769), and the USS Newton (NCC-1727) are docked at one of the hubs.

A Klingon bird-of-prey of the 22nd century is undergoing repairs in a drydock.

The wrecked USS Constellation (NCC-1017) is shown adrift in an asteroid field. This image is from the episode "The Doomsday Machine".

The shuttlecraft Galileo is on approach to the starship Enterprise. This image is from the episode "Journey to Babel".

Sometime after the events in Star Trek: Nemesis, the Argo is seen on approach from a perspective within the USS Enterprise-E's main shuttlebay. Suspended from the ceiling of the bay, there are four McCall-class fighters: (the McCall, the Yeager, the Siouxsie, and the Edwards). Across from the fighters, there are four Type-11 shuttlecraft, including the Galileo. 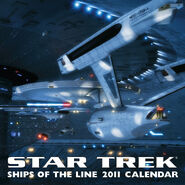 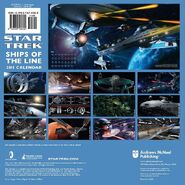 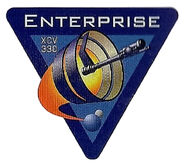