The Original Series, The Next Generation

As the refitted USS Enterprise hovers over a crater lake, her reflection in the lake displays the starship's original configuration. The painting is an homage to Andrew Probert's work that appeared on the cover of the magazine "Enterprise Incidents".

The Class F shuttlecraft McAuliffe is flying towards a landing zone on an unnamed Class M planet home to the Scintilla. This painting has been animated for drex-tv03.

The USS Balmung is supplied by the cargo ship USS Mughi.

The USS Enterprise arrives at a drydock in orbit of Earth serviced by workbees and Federation travel pods.

In the atmosphere of an unnamed planet, the USS Allegiance is battling a Borg cube.

The USS Planck conducts her shakedown while orbiting an unnamed planet.

The USS Ambassador conducts her field trials in an unnamed planetary system.

The USS Ambassador and the USS Planck are shown in a general layout, and there are dorsal, fore, aft, and side views of each ship.. Specifics for both classes are listed.

In an alternate reality, the USS Reliant approaches the spacedock Tango Sierra. In the background, the USS Enterprise-A is seen on an approach vector to the dock.

The USS Wallace is on a course for a landing in the shuttlebay of an unnamed Sovereign-class starship.

In a scene from the episode "Relics", the USS Enterprise-D is seen entering the Dyson Sphere.

The USS Enterprise-E, after a successful strafing run, passes the exploding Son'a injector assembly. This painting is based on events seen in the movie Star Trek: Insurrection.

Captain John Christopher's F-104 Starfighter is flying alongside the USS Enterprise. This painting is based on events seen in the episode "Tomorrow is Yesterday".

In an unnamed planetary system, the SS Botany Bay is discovered by the USS Enterprise. This painting is based on events seen in the episode "Space Seed".

Glow from the Scintilla civilization (January) 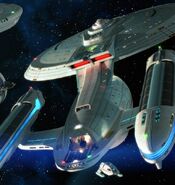 USS Enterprise-D (September)
Add a photo to this gallery

Retrieved from "https://memory-beta.fandom.com/wiki/Ships_of_the_Line_2012?oldid=727817"
Community content is available under CC-BY-SA unless otherwise noted.