The Original Series, The Next Generation, Deep Space Nine, Enterprise

Starfleet personnel are busy in a cargo bay adjacent to the shuttlebay of refitted Enterprise. (TOS movie: The Motion Picture)

The USS Aventine flies alongside the starship USS Enterprise, of which a replica exits in the 24th century. (DTI novel: Watching the Clock)

Shuttlecraft Galileo returns to the Enterprise, which is waiting at Luna.

In the atmosphere of Earth, the legendary starships USS Enterprise and USS Enterprise meet. Shuttlecraft Galileo 5 has departed the Enterprise-D and set course towards the older Enterprise.

The refit USS Enterprise is on its way to a bright star that turns the nearby nebula crimson red.

The Type-7 shuttlecraft Copernicus departs a shuttlebay 2 in the mid-24th century.

Starship USS Phalanx is moored to a shipyard, undergoing the final stages of construction.

The Enterprise's shields flare under the phaser fire of USS Stargazer. (TNG episode: "The Battle")

The USS Defiant roars past Deep Space 9, closely followed by its shuttlecraft Chaffee. Meanwhile, Enterprise-D is docked at the station while an Excelsior-class starship emerges from the Bajoran wormhole. (cf. ST - Typhon Pact novels: Plagues of Night, Raise the Dawn)

Starship USS Thantos patrols the Romulan Neutral Zone. For more information on the creation of this painting, see http://madkoifish.wordpress.com/2011/05/03/a-bit-of-mid-tos-stuff/. 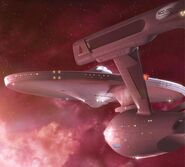