A longtime favorite among Trekkers and sci-fi fans, Star Trek: Ships of the Line 2015 Wall Calendar gives even aficionados something they can't get elsewhere - spectacular illustrations of the ships and vessels from the Star Trek television series, films, and rich lore.

The Columbia-class SS Enterprise travelling with two Xindi-Reptilian Contortrix-class escorts through the remnants of the Delphic Expanse.

The Sovereign-class USS Enterprise-E after performing saucer separation in orbit of a planet with at least four moons, together with two McCall-class shuttlecraft, Shuttle 227 and Shuttle 469.

A D'ama-class battlecruiser above a cratered surface.

Near a ringed planet, USS Enterprise escorts the Leif Ericson.

Four Saber-class starships USS Garza, USS Sanders, USS Sentry and USS Peterson are charging towards a moon base while under fire from said station.

The USS Enterprise-A and USS Reliant exchange supplies via the Type-4 shuttlecraft Galileo.

Starfleet utility vessels, among them the Annie and numerous sphinx workpods, retrieve wreckage, desolate ships, lifeboats and escape pods from the aftermath of the battle at Wolf 359.

Among the wrecks are at least two Constitution-class starships, a Miranda-class, a Niagara-class, a Nebula-class, a Cheyenne-class, a Nova-class, a New Orleans-class, and a Type-6 shuttlecraft.

The {{USS|Sanders}} in an assault on the moons of Nibia. (July)

An escape pod from the Battle of Wolf 359. (September)

The {{USS|Archon|NCC-189}} under attack during an Earth-Romulan War battle. (November) 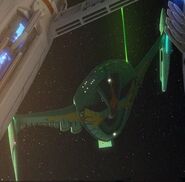 A Romulan bird-of-prey firing on the USS Archon. (November)