In celebration of Star Trek™'s landmark 50th anniversary, the 2017 edition of this fan-favorite calendar is dedicated to showcasing spectacular images of the most famous vessel in the Federation: the U.S.S. Enterprise™ (NCC-1701), in a variety of iconic scenes and settings.

A cropped version of the centerfold image.

In proximity to Murasaki 312, Galileo prepares for departure from Enterprise's hangar bay.

At the Presidio near the Golden Gate Bridge in San Francisco, several Federation shuttlecraft are at rest on a landing pad, including the USS Jefferies and the class F shuttlecraft Galileo from the Enterprise.
(The USS Jefferies is based on the curved-hull shuttle originally designed by Star Trek: The Original Series art director and production designer, Matt Jefferies.)

Enterprise gets up close and personal with the First Federation vessel Fesarius.

In retaliation for the destruction of Outpost 4, Enterprise engages the ChR Gal Gath'thong in battle.

Under the control of a rogue M-5 computer, Enterprise attacks her sister ships Excalibur, Hood, Lexington, and Potemkin.

A shuttlecraft landing facility at the Presidio in San Francisco (April). 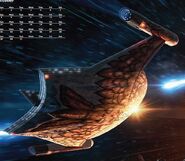 The USS Voyager (front cover).
Add a photo to this gallery

Retrieved from "https://memory-beta.fandom.com/wiki/Ships_of_the_Line_2017?oldid=727916"
Community content is available under CC-BY-SA unless otherwise noted.