4722.1–4722.8
"Side Effects" is the first of five Star Trek: The Original Series manga stories from the 2006 anthology Shinsei Shinsei (New Life, New Star), published by TokyoPop, with story by Chris Dows, with art by Makoto Nakatsuka. In this story, a landing party aboard a 200 year-old damaged spacecraft finds a large group of humanoids hooked into technology. The ending contains a shocking revelation.

McCoy says the humanoids locked in the mysterious equipment are all from the same race, "but have combinations of other species spliced into them." One genetic hybrid shows traces of human and Romulan DNA along with hundreds of others. Some have cybernetic implants grafted into their nervous systems. Feeding tubes and circuitry keep them alive in a semi-conscious state. Records indicate the ship had been launched more than 200 years ago.

A female hybrid has mechanical implants and organs from nine species within her, but doesn't seem to be as debilitated as the others. The woman suddenly awakes, breaks out of the equipment holding her, grabs Chekov, and pokes something into his neck before Kirk can fire at her. All the humanoids begin awaking, and the woman seems unaffected by phaser fire, so the landing party quickly beams back to the ship.

While Chekov is being treated, a wormhole opens nearby. A massive vessel emerges from within and drags it, the damaged ship and the Enterprise through the wormhole to a massive space station orbiting a black hole in an unknown area of space. Around the station, the Enterprise and more than 100 other vessels are being held in high-energy containment fields, and some are over 3,000 years old. Yet the station itself is no more than 50 years old.

Chekov has been infected with the same accelerated antigen as the hybrids, and it is killing him. McCoy deduces someone is kidnapping as many races as they can, using their immune systems to improve its own, to research a cure for a highly-adaptive disease. Spock realizes that, due to time dilation effects from the event horizon of the black hole, it is possible for an experimenter to send ships into normal space-time, run experiments for several hundred years, and then retrieve the ships, with only days or weeks having passed near the black hole.

Uhura is unable to contact the station, but the mutated female and several other hybrids appear to be attacking the satellite's perimeter shields. McCoy says the female hybrid's physiology is unique, and since she infected Chekov, a tissue sample from her is needed. Even in suspended animation, Chekov will be dead in a matter of weeks.

Beaming to the station and tracking the female hybrid, the landing party finds her and several followers attacking station security guards. Following a fight, security evades the female and brings the landing party to a command center where they met Dr. Myznek. Myznek says their race is dead apart from those left on the station and he's spent 50 years trying to save his race. He believed the female – his daughter, Danzek – had the cure to the disease. Danzek then breached the command center and, after a fight, infects her father with her antigen. She reached for Kirk, but Spock deflects her arm and breaks her shoulder, spilling her blood on him. The station begins breaking up and reopening multiple wormholes. After beaming back, Sulu pilots the ship back through the wormhole they arrived in, returning to Federation space. The blood on Spock allows McCoy to cure Chekov.

Captain's Log, Stardate 4722.8.
The Enterprise escaped its space-time prison... and Chekov is on his way to recovery. However, the nature of what we experienced continues to elude us. I am working with Mr. Spock and Dr. McCoy to complete our report to Starfleet.

Spock says several escape pods were jettisoned during the breakup of the station, but one pod had been piloted deliberately into another of the wormholes. There may have been at least one survivor, but as there is no way to know where or when the wormhole exits, the survivors might emerge thousands of years in the past or future. McCoy says the infection was curable only because it came directly from the female. "If she goes on to infect others," he says, "and the pattern of infection continues, resistance to such a race would be, well, futile." 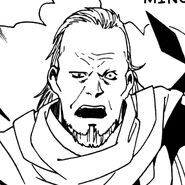 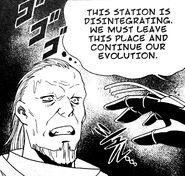 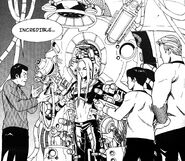 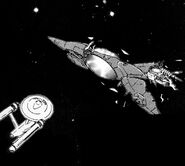 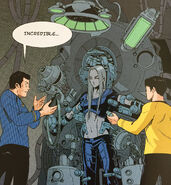 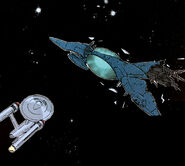 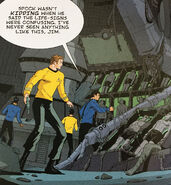