3624.3
Trapped in superspace, the Enterprise crew is relentlessly hunted by a terrifying war machine! — "Siege in Superspace" was a Star Trek: The Original Series comic book story published by Gold Key Comics in 1974. It was the 20th story drawn by Alberto Giolitti and the first of two stories written by Gerry Boudreau. In this story, the USS Enterprise is shot through a black hole in the year 2267 into an unexplored region outside of the universe.

What strange and fantastic terrors lie beyond our own infinite universe? Captain Kirk and the crew of the starship Enterprise uncover the darkest secrets of existence when they are trapped in the void called superspace and they encounter the most feared war machine ever created!

Captain's log, stardate 36:24.3 – Our destination is Draconis, a semi-civilized planet on the fringes of distant space. The Draconians seek admission to the Federation, and we are to report on their present social and cultural conditions.

A malfunction forces the Enterprise to shut down warp engines. As repairs are conducted, the ship orbits Nymyn, a nearby neutron star, but the star suddenly experiences a gravitational collapse and turns into a black hole. It drags the starship through a vortex into superspace, a region between universes. The Enterprise is near a planet with a breathable atmosphere, so James T. Kirk, Leonard McCoy, and Nyota Uhura beam down to reconnoiter while Spock and Montgomery Scott manage repairs.

The landing party destroys a vegetable metalloid creature to save Rhuna, a citizen of the nearby underground city of Caeminon. Its inhabitants are descendants of a race which built a defensive war machine that malfunctioned and wiped out their civilization. Although the machine itself had been destroyed, its memory core survived. This mind module used genetic engineering to create an army of metalloids to kill the surviving population. Repudiating violence and weaponry, the survivors hid underground and locked away their weapons. Rhuna and her lover Kyr Nostrand were part of a team sent to explore the surface and see if it could be reclaimed, but they were slaughtered by the metalloids. Before her lover died, he gave her a charm bracelet. Rhuna brings the landing party to the underground city.

Captain's log, stardate 36:24.8: The Enterprise has passed through a "black hole" resulting from the gravitational collapse of a neutron star and lies stranded in superspace. Dr. McCoy, Lt. Uhura and myself have been escorted to Caeminion, now besieged by an army of vegetable-metalloid monsters.

The vegetable metalloids have followed them to the city. Without any weapons, the people are defenseless. Hoping to entrap them, Kirk, McCoy, Uhura and Rhuna lead the metalloids to underground energy pools, but the creatures are not fooled and start a rock slide. Rhuna suggests they see if ancient weapons locked away might help them, which turn out to be rifles and swords. As metalloids storm the arsenal, Kirk notices Rhuna's bracelet glowing in the dark. He realizes it is being used to track them and destroys it with his phaser. Suddenly the creatures all freeze, paralyzed. Amid the bracelet's debris is the mind module itself. With it deactivated, the people are safe.

Kirk keeps the small device when the landing party beams up. As the Enterprise proceeds at warp four towards a nearby star that is about to go nova, Spock theorizes that the energy from the explosion might be enough to return them home. Kirk suggests that they fire the mind module into the star to speed up the process of gravitational collapse and create an artificial black hole. Their efforts work, transporting the Enterprise back into the universe.

Captain's log, stardate 36:25.2: Safely in our own era, we continue our trek to Draconis. In spite of everything, I don't think I will ever be able to forget being trapped in that void called superspace! 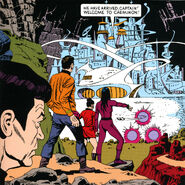 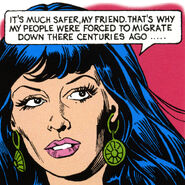 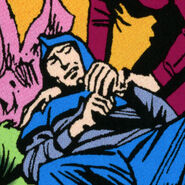 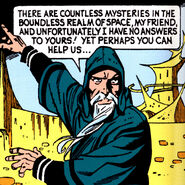 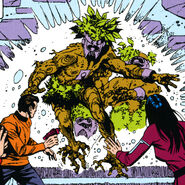