The Sigma-class design was based on the R1-class space stations of the 23rd century. (TOS movies: The Motion Picture, The Wrath of Khan, FASA RPG module: Regula-1 Orbital Station Deckplans)

The primary hull was cone-shaped, with additional modules attached underneath, and topped by an antenna on top. Its characteristic feature was a ship-sized launch bay leading into the primary hull. That docking bay was used to service, store, and construct starships. (DS9 episode: "A Time to Stand", ST video game: Armada)

In 2377, a platform was added to the station to allow Federation mining freighters to dock and unload latinum collected from nearby latinum nebulae. (ST video game: Armada II)

In the same era, newly-constructed starbases of this class had a complement of 150 crew. 600 crewpersons were needed to maintain standard operations. The maximum crew capacity was 1500. The stations were equipped with a powerful deflector shield, and pulse phasers more powerful than those of any ship active in the region and era. (ST video games: Armada, Armada II)

Originally, stations of this type were constructed by Federation Starfleet in sectors of the Alpha and Beta Quadrants. Following a counter-offensive against the invading Borg Collective, Starfleet maintained stations of this class for several months in the Delta Quadrant, before evacuating all personnel from the occupied sector. (ST video games: Armada, Armada II mission: "There and Back Again")

The exertior of the station was held in white and grey tones. When needed, different colors marked allegiance of the station. None, white or blue markings represented Starfleet affiliation. During Klingon supervision of Starbase 109, that station was marked red. Borg assimilation led to green markings. (ST video games: Armada, Armada II) 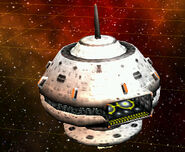 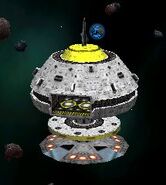 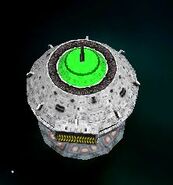 Sigma-class starbases were operational as early as 2365. (TNG episode: "The Measure of a Man")

In 2376 and 2377, space stations of this class saw action during wars with, and incursions by, the Borg Collective, Species 8472, and Gul Kentar's Cardassian rebellion. (ST video games: Armada, Armada II)

The Sigma-class station was still in use as late as 2379. On stardate 56123.1, such a station appeared in a holographic Starfleet Academy starship control training tutorial under the auspices of Lieutenant Commander Carey. In the tutorial, the USS Norris was stationed at Starbase 612 and critically understaffed. Its complement was replenished when Captain Jean-Luc Picard transported crew from the USS Enterprise-E over. (ST video game: Armada II mission: "Tutorial: Controls")

Retrieved from "https://memory-beta.fandom.com/wiki/Sigma_class?oldid=677347"
Community content is available under CC-BY-SA unless otherwise noted.