7795.3
"Silent Cries" was the fourth of five stories in the TOS Untold Voyages miniseries published by Marvel Comics in 1998. The story was set after TOS movie: The Motion Picture, depicting events from the fourth year of Captain Kirk's second five-year mission aboard the refurbished USS Enterprise. In this story, the crew encountered an unusual lifeform capable of instantaneous subspace communication.

Captain's log, stardate 7795.3
The Enterprise had been headed for Parides IV, a strategically important and non-aligned planet, that has finally agreed to open up diplomatic relations with the Federation. But a scientific discovery of greater significance, in another sector of space, now requires the immediate presence of the Enterprise — forcing me to consider a sudden change of plans! The Paridesians, however, a race to whom etiquette and protocol are almost a religion, and any delay in our arrival would be considered a major insult — and a diplomatic disaster. So an elegant solution has been devised. A shuttlecraft, bearing myself, Commander Spock, Doctor McCoy and Federation ambassador Alec Raymond, will head for Parides IV and handle the diplomatic duties, while the Enterprise, under the command of Lieutenant Commander Sulu, will travel to the Duran system, where the scientific discovery awaits.

Captain's log, stardate 7795.5
Acting Captain Lieutenant Commander Hikaru Sulu, recording. To say that I'm enthusiastic today would be an understatement. More than four years into my second tour of duty aboard this great starship, I am finally getting to command a mission of my own. At present, we are en route to the Duran system, all systems functioning normally. The crew are in good spirits, anticipating this mission of potentially profound importance, and are engaging in some stimulating conversation...

Captain's log, stardate 7796.1
We have arrived at Duran 12, where the as yet undisclosed scientific discovery has been made. A Federation science team awaits us on the planet's surface. A landing party consisting of myself, Lieutenant Commander Uhura, Lieutenant Chekov and our acting science officer, Ensign Omal, are beaming down to consult with the science team.

Captain's log, supplemental
Preparations are underway to bring the Crier up to the ship, for immediate transport to spacelab Draco Three. One of the ship's labs is being converted to house the creature and recreate the conditions of its cavern home, to ensure its stability during the journey. Meanwhile, the discovery of this unique creature has given the crew plenty of food for thought...

Enterprise log, stardate 7797.1
We are en route to Parides IV to pick up Captain Kirk and his party from their diplomatic mission. The remnants of Raydeen's band of pirates have been taken into custody and will be turned over to Federation authorities. Repairs are underway on the Enterprise's damaged systems, and the science team on Duran 12 have been appraised on the Crier's departure for the unknown. I'm also pleased to report that Ensign Omal is recovering nicely and should be back on duty by tomorrow. 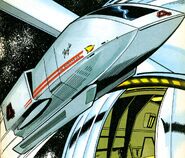 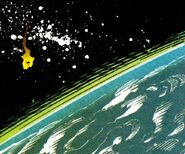