4812.46
"Skin Deep" was a Star Trek: The Original Series comic strip published in 1969. It was the sixth story arc in the UK comic strips series, published in eight parts within issues of Joe 90: Top Secret. This was the sixth of 11 stories illustrated by Harry Lindfield. In this story, the USS Enterprise encounters two unusual non-humanoid cultures.

Teaser, 26 July 1969
Captain Kirk and Mr. Spock have descended to the surface of a planet which is surrounded by a cosmic gas cloud. The planet's inhabitants have tried to take over the Enterprise because they have no mechanical power…

The crew of the USS Enterprise are perplexed as ship's sensors do not display any stars. Three days are spent on repairs.

James T. Kirk had not meant to write "Spock" — his hand had moved by itself. Given a report from Leonard McCoy, he involuntarily signs it with "Spock must die". McCoy suggests it might be nerves from three days of inaction. Kirk decides to check the sensors outside the ship with Spock. In an environmental suit, he writes on the starship's hull "I must kill Spock". He warns Spock he can't control his arm as he lifts a tool threateningly. Spock stuns Kirk with a phaser, but recoil pushes Spock backwards… until he bounces off of a black membrane encompassing the ship. Kirk is able to slice through the skin, but it reseals itself.

A humanoid-shaped glow appears. It is composed of many non-humanoid Balants which confess to having used their powers of levitation to manipulate Kirk into killing Spock — all so the Balants can take over the Enterprise. Kirk orders Bailey to fire ship's phasers at them, but the aliens absorb the discharge. Membranes suddenly form around Kirk, Spock and the aliens, revealing that these skins will envelop any energy sources. Kirk and Spock use their maneuvering thrusters guided by radio signals to get back to an airlock. Shutting down the ship's engines release the membranes surrounding Kirk, Spock and the ship, revealing an unidentified planet contained within a very large gas cloud.

The planet is not class M, so Kirk and Spock beam down wearing environmental suits. They come across a domed membrane on the surface. Several glowing aliens fly out to meet them, then retreat when a gap in the gas cloud lets in a large meteor shower. Kirk and Spock run for cover towards the dome, and enter an underground city defended against meteors by a force field. This city was founded by Kalins, a similar-looking race to the warlike Balants who wanted to escape from the planet.

After the barrage ends, Balants pile meteorites atop the force field to entrap Kirk and Spock, believing they will now be able to control the Enterprise. Bailey and Hikaru Sulu fly down to the surface aboard the Galileo and use its phasers to clear the debris. Kirk and Spock board the Galileo and head back to the Enterprise. Meanwhile, the Balant leader has found an open hatch and boards the starship. Suddenly he disintegrates—he was unable to withstand exposure to oxygen. Later, Kirk speaks with the remaining Balants outside the ship. He explains that they cannot leave their protective gas cloud and must learn to live with the Kalins, but someday they might learn how to bring that cloud with them in space.

After drifting past the perimeter of the gas cloud, the Enterprise reenters normal space and resumes its mission of exploration. 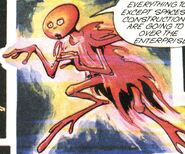 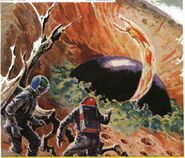 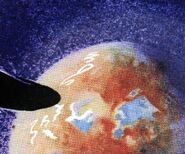 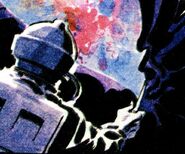 11 May 2017
Reprinted in the omnibus Graphic Novel Collection, Volume 10. (Eaglemoss)