Slaves of the Frogmen

Slaves of the Frogmen

unknown
"Slaves of the Frogmen" was a 12-page Star Trek: The Original Series comic strip. It was the 20th weekly story arc in the UK comic strips series, published in four installments in TV21 Weekly in 1971. This was the second of six stories drawn by Vicente Alcázar and Carlos Pino. In this story, James T. Kirk and Spock aid a slave rebellion.

Teaser, March 27, 1971
A freak effect on the transporter beam from the starship Enterprise landed Captain Kirk and Mr. Spock on an unknown planet. There was nothing they could do but wait for nightfall and try to plot their position from the stars…

Arriving in orbit of Santar, Kirk and Spock prepare to beam down to meet with the colonial governor. During transport, the planet's binary stars flare into a spectacle of radiation which redirects the transporter beam to Muton in a neighboring star system. The two camp out, but as night falls, they are attacked by several large creatures.

Suddenly, a whistle blows in the distance, and the creatures retreat. They are controlled by a group of frogmen from a nearby hover-saucer. With a translator communicator, Kirk explains how they had accidentally materialized on the world, but the frogmen don't believe him. Before Kirk and Spock can be shot down, they are snared by jungle vines and the frogmen hit by arrows – they are being rescued by a group of indigenous humanoids, a group of freedom fighters.

Frogmen had overtaken their planet, slaughtering most of the native population except for slave laborers. This group had been off-world, but can't do much to stop the frogmen because their patrol cruiser was damaged. As Spock works to repair their computer systems, the ship is spotted by one of the frogmen, who manages to escape in a hover-saucer. By the time a larger vessel approaches, however, Spock manages to complete repairs and they are able to destroy it.

The rebels' ship assaults the capital city. Frogmen flee to the countryside, with the rebels succeeding in their first step to free their world from oppression. They give Kirk and Spock a transport ship to fly back to the Enterprise. 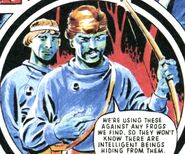 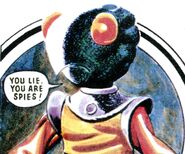 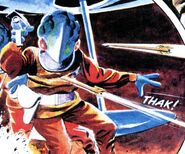 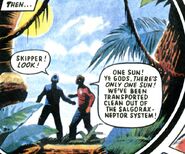