A snowman was an snow sculpture made to resemble humanoids. The practice of originated on Earth. In q's Winter Wonderland pocket dimension, snowmen were placed throughout the valley. They would regularly become animated and engage Wonderland visitors in a friendly snowball match. (STO mission: "Snowball Fight!")

In 2151, Enterprise NX-01 crew members Lieutenant Malcolm Reed and Ensign Travis Mayweather built a snowman on Archer's Comet. Because the Earth Starfleet crew was under open surveillance by the starship Ti'Mur, Reed and Mayweather fashioned the snowman after a Vulcan. (ENT episode: "Breaking the Ice")

In 2364, one of the children on the USS Enterprise-D built a snowman on the ship's holodeck. (TNG comic: "Spirit in the Sky!")

In 2383, Rebecca Sisko built snowmen outside her home. She joked that one them was a snow-captain. (ST - Typhon Pact novel: Raise the Dawn)

In the 2370s, Klingon children would build Vulcan-looking snowgons as part of the Khristmas ritual. (ST reference: A Very Klingon Khristmas)

During the festive season in 2409, q put numerous snowmen in his Winter Wonderland, which he opened to officers from the Federation, the Klingon Empire and the Romulan Republic. These snowmen were often put in fighting postures, with wooden sticks standing in for phasers, phaser rifles and bat'leths. The snowmen resembled several major Beta Quadrant species, namely Andorians, Humans, Klingons, Letheans and Vulcans. (STO mission: "The Fast and the Flurrious")

Later on, q animated the snowmen regularly to engage in friendly snowball fights with the visiting officers. The only ways to defeat the animated snowmen was by using snowballs and snow guns. Once 150 snowmen had been dispatched, the Snowman Overlord appeared on the ice lake, proclaiming himself the ruler of "all the lands of ice and snow." Defeating the overlord required the cooperation of several officers. Fighting snowmen either were basic humanoids with a Starfleet combadge or Klingon. During the fight, existing snowman sculptures were animated and additional snowmen could spontaneously erupt from the snow.(STO mission: "Snowball Fight!")

When q added Gingerbread Colony to the wonderland, the animated snowmen became the enemies of the Gingerbread people and attacked them repeatedly. Only a five-person team of Allied officers was able to push back their invasion of Gingerbread Colony each time. Leader of the invasion was the Snowman Baron, another overlord but not the same from the snowball fight. Among the rewards granted by q upon defeating the baron was a frigid lump of coal, which had the power to transform an officer in possession of the item into a snowman, but only in Winter Wonderland. (STO mission: "Winter Invasion")

A Ferengi holiday item vendor in Winter Wonderland offered harmless non-combat snowman pets in exchange for 25 Andorian sleigh bells and 25 Bajoran Gratitude beads. That snowman would only be animate during the festive season and appear alternately in the shape of Andorian, Human, Klingon, Lethean or Vulcan snowmen. Human snowmen would either sport a dark Starfleet combadge or a hole in the center. (STO mission: "Winter Invasion")

In 2410 (2014 Wonderland time), snowmen assimilated by the Borg and led by the Borg Snow Queen attempted to invade the Winter Wonderland and assimilate it. The Gingerbread veteran directed AQA officers to four parallel lanes leading to the ice fortress, where the defenders would make the last stand against the Snorg. Borg troops tried to reach the ice fortress through the fortified Black Diamond, Gold Sphere, Crimson Cube and Blue Lozenge lanes. (STO mission: "Tide of Ice")

In the Winter Wonderland, inanimate snowmen were made to resemble several species from the Federation or Klingon Empire by adding wood to imitate facial features like pointed ears, bony ridges and tusks. The snowmen were positioned in humorous scenes or scenes of battle between Starfleet and KDF troops.

During the times when q animated the snowmen, they reverted to a basic humanoid style devoid of racial features. The Snowman Baron and Snowman Overlord stood out with their enormous size, standing approx. 10 meters tall. (STO missions: "Snowball Fight!", "Winter Invasion") 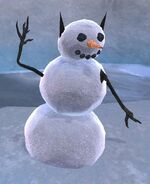 A Vulcan snowman with Starfleet chevron. 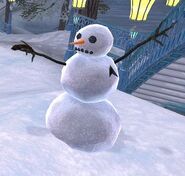 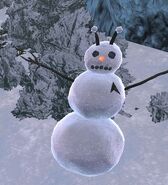 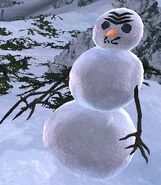 A Nausicaan.
Add a photo to this gallery

Retrieved from "https://memory-beta.fandom.com/wiki/Snowman?oldid=639638"
Community content is available under CC-BY-SA unless otherwise noted.