operational (antiquity, again since 2409)
The Solanae Dyson Sphere was a massive space station, a Dyson sphere commissioned by the Iconian Empire and built by the Solanae thousands of years ago. In the early 25th century, various galactic powers competed for the control of the Solanae Dyson Sphere. (STO video games: Legacy of Romulus, Delta Rising)

Originally, the star was of a different type. It transformed into a brown dwarf due to a large-scale industrial accident, which swamped the Dyson sphere with tetryon radiation, forcing the inhabitants to abandon this place. (STO - Solanae Dyson Sphere missions: "Unlikely Neighbours", "Unsafe Practices", "Unsavory Actions")

In 2409, the Solanae Dyson Sphere was first discovered by the Federation MIDAS Array when it found a 2 AU-wide area devoid of readings 30,000 light-years from Sol in the Delta Quadrant, close to the border of the Beta Quadrant. Starfleet dispatched the USS Callisto to investigate the anomaly. (STO video game: Legacy of Romulus [Season 8])

Soon after, the Romulan Republic had the dormant Iconian gateway network reactivated to save New Romulus from destruction. This revealed a ship-sized gateway in the Jouret system. The Romulan Republic claimed all gateways in its territory, and the Solanae Dyson Sphere. The young nation was unable to control the vast structure on its own and turned to its allies, the Federation and the Klingon Empire, to develop the Dyson sphere and perform a sweep and destroy mission of the Omega particles detected by the USS Enterprise-F. However, the three forces were waylaid by the Voth, who claimed the Dyson sphere for their own and sought to weaponize the Omega particles. To combat the Voth threat, the multinational Dyson Sphere Joint Command was put in charge of the Solanae sphere, under the aegis of the Romulan Republic. One of the sphere's spires was chosen to serve as command center, and renamed Dyson Joint Command. (STO - Solanae Dyson Sphere missions: "Sphere of Influence", "Circles within Circles")

The tripartite alliance fought the Voth on the inside of the Dyson sphere until the Voth forces were obliterated by the Undine. (STO - Solanae Dyson Sphere missions: "Supply Woes", "The Contested Zone", "Fluidic Destruction") 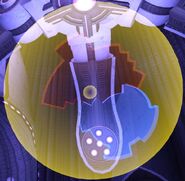 Territorial claims displayed on the orrery. 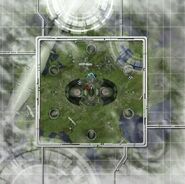 The Alien Base spire. 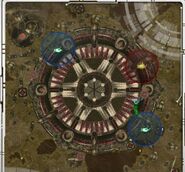 PK locations in the Undine Battlezone.
Add a photo to this gallery

Retrieved from "https://memory-beta.fandom.com/wiki/Solanae_Dyson_Sphere?oldid=685354"
Community content is available under CC-BY-SA unless otherwise noted.