For other uses, see Somerville.

Federation shuttlecraft
The Somerville class was a 25th century Federation starship type, an intel science vessel and variant subclass of the 23rd century Hernandez-class science vessel, in Starfleet service from the 2410s decade. The class was conceived when the Advanced Starship Design Bureau (ASDB) recovered the 150-year abandoned Yard 39 and its Hernandez-class technology. It was equipped with a console that could trigger a mycelial spore burst. (STO website: New Intel Science Vessels!)

The Hernandez-class USS Somerville was active in the Beta Quadrant in the 2250s decade. Around the year 2252, the Somerville recovered spores of Prototaxites stellaviatori, a pivotal step in the development of the spore drive. (DSC - Discovery Annual comic: "2018")

Over 150 years later, in 2410, Ensign Elyos and Lieutenant Whetu of the Utopia Planitia Fleet Yards discussed the recovery of Yard 39 and several hulks of Starfleet ships hastily abandoned there when the star TL-9139 erupted and flooded its system with baryon radiation in 2259. With the radiation suddenly diminishing, Starfleet was able to recover Yard 39 and its assets. (STO - Age of Discovery short story: "Utopia Planetia: The Mystery of Yard 39")

Vice Admiral S.J. Hemphill spearheaded the ASDB project to develop the new starship classes based on the 2259 vessels. On stardate 87751.8, the Utopia Planitia Starfleet Yard hosted the commissioning ceremony of the USS Europa (NCC-97640), first of its class. (STO - Age of Discovery short story: "The Past Reborn")

The prototype USS Somerville (NCC-93200) was commissioned on stardate 87724.4, in the year 2410. Councilwoman Shull, Fleet Admiral Jorel Quinn and the new commanding officer Captain Esser were present at the event. The commissioning speech was held by Captain Va'Kel Shon of the USS Enterprise-F at the Utopia Planitia Fleet Yards. (STO - Awakening short story: "Commissioning the U.S.S. Somerville")

Both the new Somerville- and the revived and refitted Hernandez-classes shared the same intel science vessel capabilities upon launch. Besides the cloaking device and intel sensor drones to gather intel typical for 25th century intel starships, a console could target an enemy vessel with a mycelial spore burst during combat. (STO - Awakening mission: "Welcome to Earth Spacedock")

In the mirror universe, Captain Kuumaarke was in command of a ship of this class, the ISS Reskava. (STO - Terran Gambit mission: "Firewall")

In the 25th century, the design of the Somerville-class intel science vessel allowed its commanding officer to choose from different designs of hull materials, which could be modified further at shipyards. (STO - The Klingon War mission: "Welcome to Earth Spacedock") 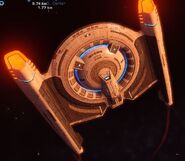