The Space Between No. 5

42317.1
Space Seeds is a Star Trek: The Next Generation comic, the fifth issue of IDW Publishing's The Space Between miniseries. The comic was written by David Tischman with art by Casey Maloney, and was initially released in May 2007, with a reprint in the omnibus of the series in September of the same year. The story, set in 2365, sees the USS Enterprise-D visiting The Armada, an agricultural colony, to try and find out why the colony has been suffering crop failures.

Captain Jean-Luc Picard discovers some harsh realities in a garden-like paradise, when the Enterprise investigates crop failures at The Armada, a colony of self-sustaining agricultural domes built atop an asteroid belt. And Wesley Crusher—adjusting to his mother's recent absence—makes an important self-discovery, as he makes friends with a group of farmer's children.

A game of Poker. Commander William T. Riker lays down his cards and waits to see his opponent's hand. Wesley Crusher puts down a full house and cheerfully pulls the winnings to his side of the table until... he is interrupted by the disembodied voice of Commander Riker, calling him to join an away team. Crusher ends the holodeck program and heads for the transporter room.

Captain's Log, stardate 42317.1: The Enterprise has been called to The Armada, a colony of agricultural domes built on the Maltese asteroid belt. The fruits and vegetables of these farms feed millions of people in this sector but unexplained crop failures now threaten that food supply, and Starfleet has asked the Enterprise to investigate.

On a more personal note, Commander Riker informs me Wesley Crusher is having difficulty adjusting to his mother's absence. Wesley is an exceptional young man, and he has become a valued member of my crew. I hope our time at The Armada is a breath of fresh air, for all of us.

In one of The Armada's domes Picard and Riker talk to a farmer, Hommun, as they inspect a crop. Like the quadrotriticale, plomeek, and uttaberries all over The Armada it is brittle as glass and utterly inedible. Data reports initial scans indicate cellular breakdown of the minerals in the soil.

Meanwhile the Phoenix discards its outer casing and deploys its warp nacelles... and explodes! Wesley watches, bemused, as the farmers' children entertain themselves with the pyrotechnics display. He talks with them, a girl named Astra, and boys Cumin and Kori, neither of which seem to enjoy life in The Armada much. They are hopeful the Enterprise will fail to solve the crop problem so their families will be forced to leave.

They pass round a flask of grain alcohol, made in a still constructed from a Romulan missile they found. Wesley refuses the drink and tries to convince the other young people life in space isn't always so great either, with a hint of sadness, touching upon his missing family. Cumin retorts, and hits a nerve in Wesley, making a comment about fathers, Wesley's of course being dead. Wesley beams back to the Enterprise.

On the bridge of the Enterprise, Dr. Pulaski hails in to complain about Data using her lab to analyze his soil samples. Riker reassures her Data was working under her orders and Data offers to work in the science lab on deck seven from then on. Data then reports his findings: the soil samples contained minute levels of chroniton particles; he suspects the farmers were trying to use them to accelerate the growth of their crops.

In The Armada Picard enjoys assisting Hommun in cutting down a tree, nostalgic about the life he never engaged with at home on Earth. They are interrupted when Riker beams down and reports his findings. Hommun immediately admits to it, claiming it was for the benefit of the families.

At the farm house Cumin and Kori are already packed, ready to leave The Armada. Wesley comes to confront them; he suggests they found the chronitons on the Romulan missile and suggested the scheme to their parents. But worse, they then sabotaged the formula to make the food rot, to guarantee the they would have to leave.

Wesley insists the brothers admit to their ill deeds. Reluctant to do so they instead decide to fight. Wesley fights back and knocks Cumin to the floor, giving him a black-eye in the process.

Five years later. Picard jumps out of bed and contacts Data via the comm, instructing him to meet Picard in his ready room in fifteen minutes.

In the ready room Picard finds something eerily familiar on his computer: A Cardassian planet which had to be abandoned because their food supply had been contaminated with chronitons. All those years ago they had solved the mystery of what had affected the crops on The Armada, but never asked themselves how that Romulan torpedo had got there in the first place.

Picard has Data cross-reference the Enterprise logs with the rest of Starfleet, and Klingon and Vulcan vessels. Data soon finds connections; The technology encountered by the Enterprise on Tigan-7 years before was used on Langer 14 to tamper in an election. And the harmonic diamonds Picard had encountered on a tragic shore leave had turned up on a Maquis vessel, which destroyed itself.

Someone was using the Enterprise's logs to create offensive weapons, and as those logs could only be accessed by individuals in Starfleet. Picard is determined, he will find those responsible, and stop them.

"As the old Earth saying goes, "Sticks and stones may break my polyalloy infrastructure, but words will never hurt me"."

- Data reassuring Worf he can cope with Dr Pulaski's jibes 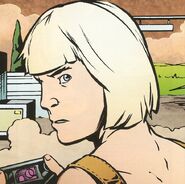 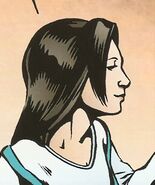 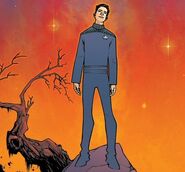