A space bug or space wagon was a type of Federation auxiliary craft in service to Starfleet in the mid-23rd century. Several types of space bugs were manufactured.

General purpose space bugs were instantly recognizable by their distinctive aft airfoil, small stabilizer wings and long duel rocket engine nacelles. Each had retractable, wheeled landing gear (1 front, two rear). The hatch could be locked with a security code. The ships were armed with missiles. Several of these vehicles were assigned to the starship USS Enterprise during the mid-2260s, and were given various assignments ranging from planetary exploration to aerial combat. (TOS comics: "The Crucial Element", "The Third Party", "The Children of Stai")

Two types of space bugs were built especially for combat. These were rectangular-shaped vessels having a narrow profile, three recessed aft engines, and a small glass dome on the top. Four of these vessels were assigned to the Enterprise early in 2266, three armed with phaser cannons while the other was designed for speed. (TOS comic: "The Eagles Have Landed")

In 2266, Hurst and his space bug crew were forced to cut short their exploration of Crucial III, hurriedly flying their space bug back to the shuttle bay just before the planet self-destructed. (TOS comic: "The Crucial Element")

Spock and three security officers took a space bug to the surface of the Mantis planet to rescue James T. Kirk and his landing party, who had been abducted by a long distance transporter and locked in a zoo. (TOS comic: "Beware the Beast")

When Kirk launched an assault on Nuofo, three space bugs, at least one exploration rocket, and three repair wagons were sent into combat against Nuofon spaceships. (TOS comic: "The Third Party")

Kirk visited Stai in a space bug, then later led a fleet of four space bugs to rescue Stai children held hostage by forces of the Galactic Union. (TOS comic: "The Children of Stai")

A group of Zond were captured after commandeering the Enterprise. They were sent into exile aboard a space bug. Rather than concede defeat, however, they used the vehicle's auto destruct system to commit suicide. (TOS comic: "Spectre of the Zond"). 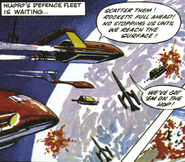