unknown
"Spheres of War" was a 34-page TOS comic strip. It was the 35th weekly story arc in the UK comic strips series, published in 17 installments in Valiant and TV21 in 1973. In this story, the crew of the USS Enterprise battled a fleet of D7-class Klingon battlecruisers while trying to rescue the son of a planetary ruler.

Teaser, 24 March 1973
Morkolians had kidnapped the son of Sektrak, ruler of the planet Thark, hoping to force his surrender in a space war. Because Morkol had the backing of the Klingon Empire, Captain Kirk took the Enterprise into action on Sektrak's side…

While passing through space, the USS Enterprise is snared by the planet Thark's planetary defense system, a huge mass of guidance spheroids that clump onto deflector shields, encase a whole starship and override its propulsion systems. The Enterprise is released after entering orbit, then hailed by the insectoid Sektrak, lord of Thark. Sektrak asks for help in a war against neighboring planet Morkol, which had been taken over by Klingons. Morkolians also held Sektrak's son hostage. Seeking to outmaneuver the Klingons, Kirk agrees to bring Sektrak along and attempt a rescue.

En route, the Enterprise engages and destroys a Klingon guardship, but gets damaged. As repairs begin, Kirk and Spock use thought-implantation equipment to saturate their minds with Klingon language and culture so that they can infiltrate Morkol disguised as Klingons. They steal uniforms from two sentries in the suburbs, then proceed into the city.

Sektrak contacts his son Aarkan via telepathy, then relays the prison cell's location to Kirk and Spock. Knowing that rescue is imminent, Aarkan breaks out of his cell. Unfortunately, when he runs into the disguised Kirk and Spock, Aarkan thinks they are Klingons and eludes them. Kirk and Spock fight some security guards, then join forces with members of a resistance movement who also sneaked into the prison to save Aarkan. In the meantime, Aarkan has been recaptured and is readied for execution. The rescuers knock out the firing squad members, take their place, and manage to free Aarkan, but the effort is caught on live television and alerts more guards. The rescuers escape with the aid of gas grenades, and then their compatriots start broadcasting fake news of Tharkian attacks on nearby cities.

In the resulting confusion, Kirk, Spock and Aarkan retreat to a spaceport and launch a rocketship into space. Meanwhile, Nyota Uhura has intercepted news that a Klingon fleet is heading for Thark. The Enterprise beams Sektrak aboard the rocketship, then intercepts the Klingon fleet. Montgomery Scott fires a salvo of missiles at the D7-class battlecruisers, then releases a trio of shuttlecraft to act as diversionary targets. Scott is able to disable one cruiser, but the rest of the fleet closes in for the kill.

The rocketship lands at the Tharkian capital, where Sektrak and Aarkan hastily deploy Thark's defensive spheres toward the Klingon ships. Klingon sensors go haywire, and the Klingon admiral responds by firing a full spread at the approaching targets. The spheres detonate, producing a massive feedback explosion that destroys the enemy fleet.

Meanwhile, resistance fighters have overrun their puppet government, and Klingon forces begin withdrawing from Morkol. Kirk proposes to a grateful Sektrak that his planet should join the Federation.

Kirk and Spock vs. firing squads in: 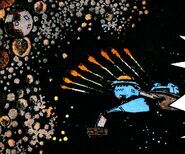 Thark with its ring of guidance spheroids.

Morkol with its two moons.