TNG Magazine
It's Christmas aboard the Enterprise, but in the midst of the celebrations a strange force invades the ship. Close on its heels come the Creeg, a race of energy siphons, who have other ideas about the 'spirit of the season'!

Captain's log, stardate 42120.3
The USS Enterprise and crew are en route from Syntagus Theluv to Federation Starbase 33 for standard debriefing and maintenance. We had hoped to be there before the holidays were upon us... but you might say that fate's lights have been against us most of the way.

During a Christmas celebration, the Enterprise encounters an alien race called the Creeg, and invites them to participate in the festivities. Once aboard the ship, however, the Creeg attack the crew and chase after an energy being they have been pursuing. The aliens have a change of heart when the spirit, which resembles Santa Claus, gives everyone it touches feelings of joy and good cheer.

Captain's log, stardate 42122.7
Whatever the galaxy traveling entity we encountered was, it left both the Enterprise and Creeg crews with more -- much more than we could've ever given it. I only hope it lasts into the new year.

According to a TNG timeline published by DC Comics, this story is set between "Encounter at Farpoint" and "The Naked Now", although the events of the series seem to be set after several other episodes had taken place. Stardates 42120.3 through 42112.7 are given in the story, but the DC Comics TNG Timeline adjusted the stardate to 41190.3.

In a rare mention of futuristic religion and/or holidays, it is noted many cultures celebrate holidays during the Christmas season, such as Chanukah, Rethlume, the coming of the Klingon gods, and others. The Marciak are shown to be having a large gathering, and the bridge crew also stumbles across a Trempolian triakk party in their pursuit of the Creeg and the energy being. 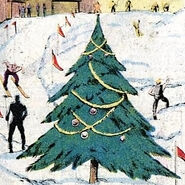