'"I am Spock… I hold the rank of commander in the Starfleet of the United Federation of Planets; I serve as first officer of the starship Enterprise. I am the son of two worlds. Of Earth, whose history is an open book… and of Vulcan, whose secrets have lain hidden beneath its burning sands… Until now..."

It is the twenty-third century. On the planet Vulcan, a crisis of unprecedented proportions has caused the convocation of the planet's ruling council - and summoned the USS Enterprise from halfway across the galaxy, to bring Vulcan's most famous son home in its hour of need. As Commander Spock, his father Sarek, and Captain James T. Kirk struggle to preserve the very future of the Federation, the innermost secrets of the planet Vulcan are laid before us, from its beginnings millions of years ago to its savage prehistory, from merciless tribal warfare to medieval court intrigue, from the exploration of space to the development of c'thia - the ruling ethic of logic.

And Spock - torn between his duty to Starfleet and the unbreakable ties that bind him to Vulcan - must find a way to reconcile both his own inner conflict and the external dilemma his planet faces...lest the Federation itself be ripped asunder.

Ambassador Sarek is summoned back to Vulcan because one of the houses of the Vulcan legislature has voted to take the planet out of the United Federation of Planets. The High Council has decided this important issue must be debated and voted on by the population.

T'Pau summons Kirk, Spock, McCoy and several others to speak at the debates. The Enterprise, which has been undergoing reprovisioning at Earth, sets out once all crew are aboard.

A description of the formation of the triple star system later known to Earth astronomers as 40 Eridani, including the planet Vulcan and its companion T'Khut.

During the traditional crew mixer held after a refit or extended shore leave, the Enterprise rendezvous with USS Coromandel to take aboard passengers headed for Vulcan. These turn out to include K't'lk, who has renamed herself K's't'lk after her death and rebirth and will also testify at the debates, as well as Sarek and Amanda.

The early hominid species on Vulcan live in a lush, comfortable environment and slowly acquire a language of words to supplement their telepathic imagery. Then their star, Vulcan's sun, undergoes a serious malfunction, swells, and burns away the forests, melts the ice caps and kills nearly every living thing on the planet.

The Enterprise flies to Vulcan, where Kirk and McCoy are received very rudely by Shath, a young Vulcan who supports secession.

As the Vulcan species rises to a tribal existence of family groups, they huddle in small clans near the few water springs, eking out a difficult living. One tribe has developed a mutation of eyes with an inner eyelid, and they successfully take the fortress of Phelsh't, which has cascading water from a rich spring; their leader in battle forms a strategic alliance to share "the eye" with other tribes, and slowly, more alliances spread advantageous physical traits through the species, including such traits as an ability to sense the presence of metal in the ground, for Vulcan is metal poor.

McCoy develops suspicions of who is behind the secession movement, and traces it to Spock's former wife, T'Pring, and her support of various small splinter groups.

Eventually, the Vulcans have reached a stage of civilization where they are attempting to construct a spaceship to fly to T'Khut, which has metal lying on its surface, but there is a five decade delay because of a family incident resulting in one member, T'Thelaih, killing many others with mind power.

K's't'lk testifies against secession. Spock meets with T'Pring, who claims to be financing the movement from money she made by investing the estate of her late husband, Stonn, in the interstellar commodities markets.

In the pre-Reformation period, a Vulcan asteroid-mining ship discovers three huge diamonds inside an asteroid. The resulting dispute leads to the deaths of the entire family and the destruction of their vessel, which was on a collision course with Ashif Station, owned by the Mahn'heh Protectorate. Believing this was a terrorist attack, Mahn'heh destroys a station belonging to its enemy nation Lalirh with the Vulcan species' first matter-antimatter bomb.

McCoy testifies against secession. Sarek, who had supported Vulcan autonomy early in his career, testifies in favor of it, being forced to do so by his government. McCoy then asks Sarek from the floor about his government's opinion concerning bribes by groups expecting to buy, at low bids, Federation public property on Vulcan.

The history reaches the time of Surak. There has never been a time in recorded history that more than ten percent of Vulcan was not at war. Surak is stunned to see a new weapon tested by his nation at proving grounds on T'Khut, and retreats into the desert to think, meets one of the Underliers (sub-surface creatures of great intelligence), and then begins writing. Surak eventually wins large numbers of disciples and logic sweeps the planet, while others reject his reforms and choose to construct spaceships and seek another homeworld to settle -- they become the Romulans.

With the help of Moira, the Enterprise's Recreation computer, McCoy produces evidence that T'Pring has been financing the anti-Federation campaign by funneling payoffs from potential buyers of Federation property to Vulcan government officials. Kirk testifies against secession, but is interrupted by news that T'Pau is critically ill.

A young man named Sarek is appointed by T'Pau to serve at the Vulcan embassy on Earth, a new ally, and to explore and experience the planet and send her reports. Eventually, Sarek is made the cultural attache at the embassy, and he meets Amanda Grayson. Together, they are involved in the universal translator project, and ultimately, they get married. Vulcan geneticists study how they may have a child, undertake the necessary planning, and produce an embryo from Sarek and Amanda's genetic material.

Kirk, Spock, McCoy, Sarek and Amanda visit T'Pau's bedside. She dies, but not before she instructs Sarek to make public the information about T'Pring's schemes and passes her katra to Amanda. After T'Pau's funeral, Spock testifies against secession.

The debates end and the voting begins. One full Vulcan day later, the voting stops and the results strongly oppose secession.

Kirk, Spock and McCoy visit T'Pring in prison, where McCoy strongly urges her to "start acting like a Vulcan". Back on the Enterprise, McCoy suggests that T'Pau may have timed her death to influence the outcome of the debates. Kirk expresses concern about Moira's evident sentience and unethical behavior, but asks her to talk to him about a raise. 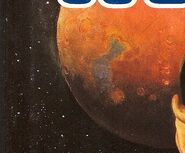