6720.8
Spock, Messiah! is a 1976 Star Trek: The Original Series novel by Theodore R. Cogswell & Charles A. Spano, Jr.. It was the second original Star Trek novel published by Bantam Books, and the third book in their line of original Star Trek fiction (following the short story anthology The New Voyages).

A defective mind link turns the logical Mr. Spock into a fiery revolutionary who sets out to convert the planet Kryos with fire, sword and a forbidden philosophy. Captain Kirk and the Enterprise crew must summon all their skill and cunning in a race against time on a hostile planet. Can they destroy the fiendish mind that holds Spock captive before it destroys them?

The USS Enterprise is conducting operations using the planet Kyros to test a new device. This telescan cephalic implant gives the Starfleet officers complete access to the knowledge and instincts of pre-scanned and selected members of the local populace. The local hill people have a taboo against showing their faces in public, much the way it was taboo for a woman to go topless in public "two hundred years ago". Evidently, this is now considered quite normal by Federation standards. It is soon realized that there is something wrong when Ensign Sara George becomes a trampy sex-pot. This is uncharacteristic of George, as she normally is one of the few women in Starfleet who still hold to the anachronistic idea that sexual harassment in the workplace is a bad thing. It is soon realized that much more is amiss when Spock refuses to return to the ship and declares himself to be the Messiah.

Spock holds the ship hostage by threatening to destroy the much needed trilithium modulator crystals. Upon further investigation, it is discovered that Spock's alternate personality was brought about by his mental connection with a local fanatic named Chag Gara. Psychologically, Chag appears to be a mentally disturbed fanatic with low intelligence and an inability to order his thoughts.

A radiation surge in surrounding space highlights the necessity of the Enterprise's departure from the local area. The ship cannot leave without those crystals that Spock made off with, so a landing party is arranged. George is discovered to have been the reason Spock's implant was at fault, but after her own is repaired, she is selected for the landing party in case any seduction of the locals becomes necessary. When the Messiah recognizes George, he takes flight for other parts of town with his supporters. The landing party tracks him to his hovel, only to find that Spock and Chag have both changed living accommodations. Here, James T. Kirk befriends a local drunkard named Ker Kaseme. They quickly learn that Ker was a physician until his license was revoked due to his inappropriate sexual relations with young girls. Kirk determines that the best way to track Spock without violating the Prime Directive is to forge local currency in order to bribe the medical board into re-instating Ker as a doctor. They then use forged funds to rent Ker an office building from which he can resume his practice as they collect data.

The Messiah organizes a demonstration of his theology by signaling the Enterprise to enter a low orbit. It is unknown how he accomplished this without a communicator, as he had disposed of his to prevent capture. The first attempt to subdue the Messiah is a complete failure, resulting in many injuries among the Starfleet crew. An emergency evacuation of their offices results in Ker being beamed aboard the ship. Spock and Chag flee to the hills with their followers. James T. Kirk's next attempt at reaching Spock involves dressing as a gypsy and following him into the hills. Montgomery Scott and Pavel Chekov are also selected for this mission. George is also included on this mission, despite recent injury, as she is considered to be the only seductive officer on board the ship. The caravan encounters trouble early on, as the Messiah had his cohorts cut an important bridge to prevent access to his area of operation. Kirk decides to ford a local river with his caravan and, in appreciation of this, George goes skinny dipping. The landing party is captured by Spock's followers, but allowed to live after demonstrating their healing abilities. Chekov causes trouble with the Chief's oldest son. George dances a strip tease to get the Chief on their side.

The Messiah again contacts the ship without a communicator to demand another 'miracle' from the Enterprise. At the big gathering of the Messiah's forces, George does her strip tease again. At the end of the dance, Kirk and company are unmasked and held prisoner. While engaging in intimate relations with the Messiah, George realizes that this man is Chag, and not Spock. Spock's ears were pointed the last time they had sexual relations, and the Messiah's are not. George knocks him unconscious which revives Spock from his comatose state. They make their getaway and beam back to the ship in time to avoid a radioactive death.

Year of Blood
Stur of the Thirty Tribes is born on Vulcan. (Referenced in library computer)

2226
Chag Gara is born on the planet Kyros. (Referenced in library computer)

Stardate 4011.9
A transporter accident results in the creation of Spock One. (Referenced in conversation)

Stardate 6724.2
James T. Kirk attempts for a second time to recover Spock, this time dressed as a Beshwa. (In-story)

Stardate 6725.1
Hikaru Sulu obeys a request from Spock to lift dead bodies into the sky, thus providing a 'miracle'. (In-story) 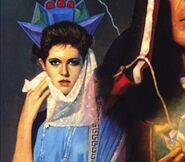 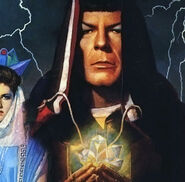