1970 editions
Captain Kirk and the crew of the starship Enterprise find themselves in the middle of an undeclared war waged by the Klingon Empire...

The Organians should be consulted about the war but their entire planet has disappeared—or been destroyed...

Mr. Spock entered the transporter chamber. His image would be flashed to Organia by the huge machine's faster-than-light tachyons. But the experiment failed. Suddenly there were two Mr. Spocks. One of them had to be destroyed...

Launching an unprovoked attack upon the Federation, the Klingons have broken the terms of the Organian Peace Treaty—leaving the Enterprise stranded deep in uncharted space, cut off from the rest of the Federation fleet.

To find out what happened to the Organians, Commander Scott rigged an experimental modification to our transportation system designed to enable a tachyon replica of Mr. Spock to travel faster-than-light to Organia. But the experiment failed, and incredibly, left us with two identical Spocks: one of whom is a replica in every way opposite of our first officer, a traitor whose continued existence poses a grave threat to the Enterprise and quite possibly the entire Federation.

One of the Spocks must die. But which one?

The USS Enterprise is mapping a region of deep space near the Shapley Center. During a philosophical discussion between McCoy and Scott on the nature of the transporters, word is received that war with the Klingons has broken out, Organia has apparently been destroyed, and the Enterprise has been cut off from the Federation. Kirk decides to head through Klingon space to Organia to find out why the Organians have not intervened, a journey which will take nearly six months. To save time, Scott proposes to Kirk that they use tachyons to create a temporary copy of Spock, beam him to Organia, and retrieve him with the information they need. However, when the experiment is carried out and the sealed transporter is opened, they find that not only has the copy failed to reach Organia, but a duplicate Spock has been created.

The two Spocks (which Kirk dub Spock One and Spock Two) each claim to be the original and take an immediate dislike to each other. Spock Two insists to Kirk that Spock One be destroyed without explaining why, but with no way of knowing which is the duplicate and which the original, Kirk decides to keep both of them on as first officer on separate shifts. Shortly afterwards, the Enterprise drops out of warp for a second on one of the Spock's instructions, risking its detection by the Klingons and forcing Kirk to relieve both of them from duty. Spock Two theorizes that the duplicate is a mirror image, reversed by whatever stopped it from reaching Organia: not just his anatomy, but his mind as well... meaning that one of the Spocks is now loyal to the Klingons. Spock One barricades himself in McCoy's laboratory and refuses to leave unless Spock Two is destroyed.

The Enterprise reaches Organia, where they find it surrounded by an energy shield which produces strong feelings of horror in the crew. Before they can investigate, they are attacked by a Klingon battlecruiser. During the battle, the Enterprise uses the deflector beam and the tractor beam together to plant a mine in the Klingon ship's warp field, destroying it. In a subsequent meeting, both Spocks insist they will only help the crew once the other has been destroyed, but McCoy claims that he has worked out that Spock One is the duplicate -- just as he escapes.

Kirk and McCoy discover that Spock One, being a mirror duplicate and therefore unable to consume normal food, had been using the equipment and chemicals in the lab to manufacture the nutrients he needed to survive. They detect a shuttlecraft leaving the hangar deck and head for Organia at warp speed. Kirk, Spock Two and Scott beam down to Organia, where the two humans suffer from intense and terrifying hallucinations due to the effect of the thought-shield. They encounter Spock One, who is destroyed in a mental battle with Spock Two with some aid from Kirk. They make contact with the Organians, who take them to the stolen shuttlecraft. Scott constructs a device which, powered by the modified engine, disables the thought-shield. The Organians, now free to act, punish the Klingons by depriving them of space flight for a thousand years. The war over, the Enterprise reports to Starbase 16 for two weeks down time and a new assignment.

James T. Kirk and one of the Spocks. 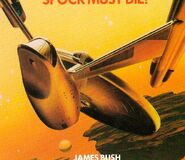 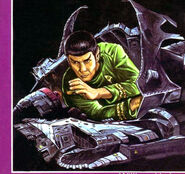 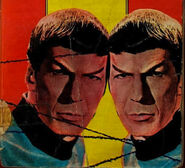 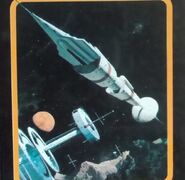