Spore of the Devil

Spore of the Devil

The Original Series No. 57

19:29:51
Cornered — by an alien being, frantic to know who he is! — "Spore of the Devil" was a comic book story published by Gold Key Comics in 1978. It was the 18th of 22 stories drawn by Alden McWilliams and the 19th of 20 stories written by Arnold Drake. In this story, Kirk, Scotty and Spock discover an alien directing the development of a medieval world, but the alien does not know where he is from.

The Enterprise is on a diplomatic mission to a world of armored heroes imprisoned, fair maidens and fire-breathing dragons! Behind the all-powerful emperor is the mysterious figure of the evil wizard, the Great Vrunon! Captain Kirk and his crew are soon to incur that wizard's darkest wrath!

I am dispatching a landing party of Mr. Spock, Mr. Scott and myself for a protocol visit to Planet Jodarr...

The group is met by Mixodar, then they ride brown unicorns across a moat into a medieval castle. Inside, they join Emperor Ledoy for coronation festivities involving dancing girls, knight swordfights, as well as a battle between deposed King Wobine and a winged kurgo beast. Major Rolano takes the landing party to guest quarters, but when his sweetheart Sylva tells him she will be unwillingly married to Ledoy tomorrow, Rolano is arrested for touching the king's fiancée and sentenced to death. Kirk appeals to Ledoy, but the king insists on ruling through fear and strength, as advised by his wizard, but he agrees to consult the Great Vrunon first.

The landing party travels with Ledoy aboard a barge along a river to the wizard's palace, the Shrine at Dafu. Inside, they see Vrunon, a large disembodied head floating within a crystal, but Vrunon agrees that Rolano should be executed. Spock scans Vuron with his tricorder and determines that he is not native to the planet, so that evening the landing party climbs out of the castle and returns to the shrine. Underneath the crystal they climb down a trap door and discover the real Vrunon, a shape-changing reptilian.

Vrunon explains that he was sent to the planet, but his ship crashed before he was born, destroying any microtapes that would have explained his mission, leaving only tapes on science. Intuiting that his role was to advance the culture toward peace, he allied with Ledoy to forge a unified empire, using holography and other technology to imply magical abilities. But he suffered from unexplained seizures, and he agrees to order Rolano's release if Spock can cure him.

En route to his crash site, Vrunon is attacked by a giant bear. After stunning the animal with a phaser, they find remains of his equipment in its cave. Spock dives into a volcanic lake, recovering the device that caused the seizures as well as a mission tape. The seizures were triggered by radio signals whenever Vrunon deviated from his assignment and guided the culture through fear instead of love.

Meanwhile, Kirk delays Rolano's execution by taking the major's place in a stadium battle with a gordoon, combating the dragon as if he were a bullfighter. Arriving late, Spock stuns the creature at Vruon's request. The wizard confesses his true origins to Ledoy, who then agrees to rule through love and frees Sylva to marry Rolano.

Medieval/feudal societies were also explored in: 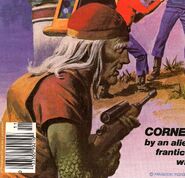 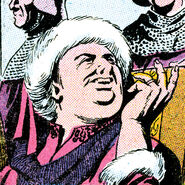 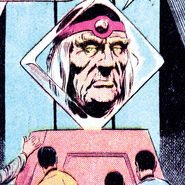 "Magical" Vrunon via a holographic projector. 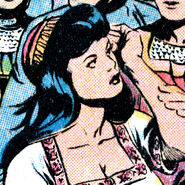 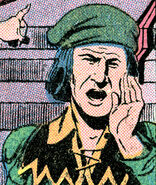 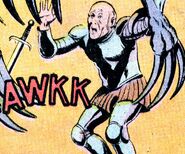 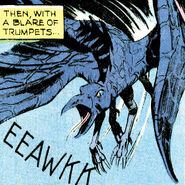 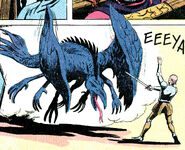