3004.8
"Sport of Knaves" was a comic book story published by Gold Key Comics in 1978. It was the 15th of 22 stories drawn by Alden McWilliams and the 7th of 10 stories written by George Kashdan.

It was the strangest cosmic heist of all time… for the ‘loot’ seemed worthless… yet the robbers risked their very lives for it! Why? To three officers of the starship USS Enterprise, the answer was to remain a mystery until they themselves were ensnared in the criminals’ web of treachery!

Nyota Uhura picks up a distress call from the Federation planet Salvum. As Hikaru Sulu pilots the USS Enterprise towards the planet, a Grotus transport exits the atmospheric shield around the planet through an atmosphere lock. It then pivots and fires on the shield, creating a hole through which the planet’s controlled atmosphere immediately begins to dissipate. The Enterprise is forced to remain in orbit and seal the fissure while the transport flees. Montgomery Scott and three engineers in gravity control suits pilot Galileo (II) to the damaged section of the shield, then exit the shuttlecraft and spray a chemical tractor-web sealant to temporarily plug the hole.

Beaming down to the main headquarters of the wildlife preserve, James T. Kirk, Spock and Scott find head zoologist Axel Carruthers waking from a stunned state. He and his staff were incapacitated by sleeping gas. Carruthers flies Kirk, Spock and Scott aboard a survey plane to inspect the wildlife habitats. Nothing seems amiss in the sectors for Aridian sandworms and Plutonian snow-beavers, but in the Gharian wedding bird habitat Carruthers spots only females. During mating season, when not in the presence of females, male birds become hyper-aggressive and grow to four times their normal size. Scott thinks that these males might have been stolen for cockfighting, a favored illicit pastime of criminals on the non-aligned asteroid Grotus. Proposing an undercover mission, Kirk asks if Carruthers can lend the Starfleet officers the oldest ship at his disposal. Carruthers provides them with a D-1 "Buggy", which they fly to Grotus.

Captain's log, stardate 3005.1 (Delayed report)
No sooner did we arrive on Grotus than our mission was temporarily waylaid...

When Kirk, Spock, and Scott disembark, they are propositioned by several women. When the officers refuse to go with them, hoodlums spying from a distance become suspicious. Hoods trail Scott as he follows squawking sounds to an arena and locates one of the missing birds. Scott is then held at gunpoint. Meanwhile, Kirk sneaks into the planetary headquarters building and stuns two security guards with a type-1 phaser, only to be captured by other guards and brought before Zarcun-5. Zarcun says he is Grotus’ duty elected leader, but Kirk believes that he is the asteroid’s criminal mastermind.

Zarcun orders Scott into the cockfighting arena where one of the hyper-aggressive and enormous Gharian wedding birds charges him. As gambling spectators cheer, bookmakers give 40:1 odds that Scott will be killed quickly. Zarcun threatens Kirk with the same treatment. Thinking quickly, Spock chooses to beam a female wedding bird into the arena, which immediately calms the male bird. Spock and Scott flee with the birds before angered spectators can stone them to death. Kirk grabs Zarcun in a head lock, forces his guards to back off, and then they are beamed aboard the USS Enterprise. Kirk arrests Zarcun on charges of robbery and attempted murder. 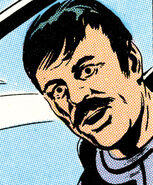 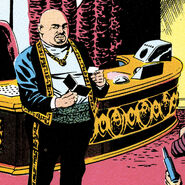 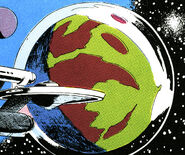