The Doomsday Bug No. 2

8908.3
Stand-Off! is a star Trek: The Original Series comic published by DC Comics in 1987. The comic was written by Len Wein with art by Gray Morrow. It was the thirty-fifth issue of DC's first monthly series of TOS comics, and the second part of the three-part The Doomsday Bug storyline, which reset the DC series leading into the events of the film Star Trek IV: The Voyage Home. The storyline continues directly from the previous issue, with the USS Excelsior at the mercies of the Romulans as it chases the deadly doomsday bug into Romulan space.

The Bird-of-Prey in the Excelsior's hangar bay 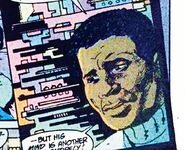