2254 & 2260
Star-Crossed was a Star Trek: The Original Series comic book, the first issue in the Star-Crossed trilogy written by Howard Weinstein. The trilogy dealt with the relationship between James T. Kirk and Carol Marcus. The three issues were penciled by Rachel Ketchum, inked by Mark Heike and published by DC Comics in 1995. In this story, Kirk and Marcus struggled with their relationship in 2254 and 2260 while serving together in Starfleet.

From solicitations
Part one of the three-part Star-Crossed storyline begins in Star Trek #73. For the first time anywhere: the story of James T. Kirk's struggle with the Kobayashi Maru, the Starfleet test of character that helped mold the man who would one day captain the Enterprise.

On his third try and with help from Carol Marcus, Kirk makes the best of a no-win situation by reprogramming the Kobayashi Maru test. Gary Mitchell manned the helm of the USS Potemkin bridge simulator at Starfleet Academy and witnessed Klingon commander Kozor yielding to the great "Captain" Kirk and agreeing to be helpful. Hours later, Kirk was still in the simulator when cadet Carol Marcus found him. He defended his actions, and later was given a commendation for original thinking.

Six years later when Kirk became First Officer of the USS Eagle, he hadn't expected to find Carol among the crew. Captain Botwin took note of their rocky interaction, and a month later urged Kirk to sort out the relationship before it interfered with their duties. He also asked Kirk to assess her Starfleet potential, as she'd earned equal numbers of commendations and reprimands. The two eventually resumed their relationship and were together three months later when the ship entered orbit of Caperna IV. That evening they had a romantic dinner, but she was distracted by her shaky status with department head Pierre Ratelle.

During the survey, Carol became curious about rock strata in a gorge. Believing she'd never get permission to climb down alone and that Gerardi was too busy studying plants, she hiked down for a quick look but lost track of time exploring a cave. When she missed the team's final check-in, Gerardi determined that she'd have to be in the gorge because mineral deposits blocked tricorder readings there. The landing party climbed down to search for her and nearly got caught in a rock slide before locating her.

It's clear that Carol is too confined by Starfleet. That evening, she also learned she was two months pregnant. When Kirk reprimanded her for endangering herself and the team, she gave him a letter of resignation. She leaves Starfleet and Kirk at Starbase 9, to be on her own. 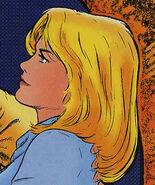 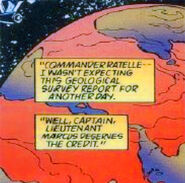