Star-jellies (known as Skymounts to the Pa'haquel) are a space dwelling lifeform first encountered by the Federation in 2364. (TNG episode: "Encounter at Farpoint")

They are an intelligent race of sentient telepathic beings that are capable of manipulating energy to create the effects of replicators and transporters. They possess two forms; one of large discs and the other being their 'true' form; that of a purple jellyfish-like (hence the term "Star-Jelly") cosmozoan.

The Jellies reproduce by extracting the residual energy from their dead and converting matter extracted from a planet during the subterranean transporter burial of the deceased Jelly to create a new Jelly. The baby is then transferred using their biological transporters amongst the school of Jellies, who each add their own touches to it, like artists perfecting a sculpture. The finished baby is then beamed onto the surface of a nursery world where it grows to maturity under the supervision of, and in continual contact with, adult Jellies in orbit. (TTN novel: Orion's Hounds)

The Jellies possess a strong affinity for psionic abilities, such as telepathy and empathy, so strong in fact, that Commander Deanna Troi was able to feel them from several light years out in 2380.

It is not known how the Jellies came to be. The fact that their biology closely imitates the technology of the Federation and other races, such as Transporters and Warp drive, suggests to some Titan crewmembers that they did not evolve naturally, but rather were genetically engineered by some ancient race.

The Jellies made contact with the Pa'haquel by landing periodically on their planet, and as they do with all nursery worlds allowing all the life forms of the planet to move over them. Being benevolent creatures, they even provided them whatever they needed, using the equivalent of replicators. This gave the Pa'haquel the chance to kill one of the creatures and convert it into a starship, which they then used to begin hunting other Jellies. This caused them to become a space-faring race, and to leave their planet in favor of living aboard a fleet of dead Jellies. (TTN novel: Orion's Hounds)

The race was encountered twice by the Federation, first at Farpoint Station on Deneb IV by the USS Enterprise (NCC-1701-D) in 2364. Farpoint Station itself was actually one of the creatures, forced into the shape by the native Bandi. The crew of the Enterprise were able to liberate the creature, reuniting it with its mate, which had been bombarding the planet from orbit. (TNG episode: "Encounter at Farpoint")

The second encounter was with the USS Titan in 2380, in the Jellies' native Gum Nebula, where they were being hunted by the Pa'haquel, who both revered as well as hunted them for their carcasses, which they used as starships. The Jellies thought of this as an evil, until Titan arrived and negotiated a peace between the two, whereby the Jellies would allow themselves to be used as starships while alive, rather than being killed for it. Through this symbiosis, the Jellies became instrumental in controlling the population of Cosmozoans, such as Branchers, which threatened all the lifeforms of the sector. (TTN novel: Orion's Hounds) 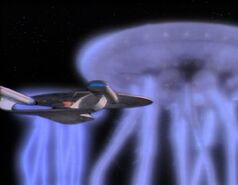 True Form of a Star-jelly. 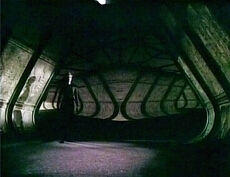 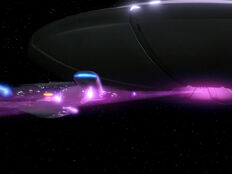 A Star-jelly scans the Enterprise. 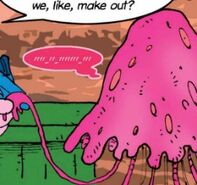 Blobulette, a Star-jelly adolescent.
Add a photo to this gallery
Retrieved from "https://memory-beta.fandom.com/wiki/Star-jelly?oldid=589251"
Community content is available under CC-BY-SA unless otherwise noted.