The Star Fleet Medical Reference Manual is a reference book showing various anatomies of species (both humanoid and non-humanoid) from the 23rd century, as well as various medical techniques.

A Publication of the Star Fleet Surgeon General.

WARNING: The Surgeon General's medical reference manual is intended as a basic source of medical information for starship crewmembers, and is not an alternative to treatment by a physician. First aid procedures should be used with caution, and only by trained personnel.

The first thing any physician should know is the Hippocratic Oath, created by Hippocrates (460-370 B.C.) cited as the "Father of Terran Medicine."

An essay on the "Historical Trends in Medicine" by John Gill, Ph.D. explains about how surgeons have been on ships created by humans since they first ships were built. And that how those surgeons have written books on "naval medical practices," such as the first such one on Earth: "The Surgeon's Mate" by John Woodall in 1617 or "The Starship's Medical Chest and First Aid in Space," published in 2105.

A timeline of important medical discoveries, failures, and plagues that have affected various important planets, starting with the Great Plague ("skag maug") on Vulcan that caused thousands of deaths, and continuing through to the present "Federation Era." The timeline ends c. 2260.

Various dates and pieces of historic information are, of course, later contradicted by both reality and future Star Trek series. One example is that the founding date of the United Federation of Planets is listed as 2125, instead of 2161. No effort has been made as yet to reconcile the dates of this example.

A "Periodic table of the Elements (Fifth Interstellar Geophysical conference standard)" lists the elements, 1 (Hydrogen) to 129 (Tricobalt), and 139 (Kironide) and 140 (Corbomite).

Interestingly, James Kirk seemed to imply that corbomite was a fictional material that he had made up, but it is listed as having been discovered in 2262 at Starbase 27.

Followed by a list of all the elements, their symbol, atomic weight (by mass number of most stable isotope), atomic weight, place of discovery, and date of discovery. (If humans discovered it prior to first contact, that place and date is given.) All dates use the Earth calendar where not specially marked using the Post-Surak Vulcan calendar.

This is prefaced by a passage from the Third Edition of "Pathology: Treating The Unknown" credited to McCoy.

Andorians are a blue-skinned humanoid species, average height: 2.3 meters (male) 1.8 meters (female). They have a life expectancy of 129 years for males and 134 years for females.

Their eyes are unusual in that they do not process the whole spectrum of light, and must be used in unison with their antennae. Andorians vision is called "quadroscopic," and is limited to tones of gray. Their auditory receptors (in their antennae) are more advanced then many other humanoids, capable of distinguishing independent sounds from a crowd. Also, to better focus their senses, Andorians will lean their head down towards a person their listening to, to better focus their monodirectional antennae.

Here, the Andorians are depicted as not having "pinnae," or outer ears. This is based on the fact that that the antennae were presumed as the basic audio sensor, and that throughout their TOS appearances their thick white hair covered where humanoid ears--or the ears of the actors acting them out--would have been.) The first prominently displayed Andorian with ears was the Andorian Federation Councilor from Star Trek IV: The Voyage Home, produced 9 years later.
Later contradictions include the fact that Andorians have non-moving antennae and the presence of only male/female genders. Clearly shown in Star Trek: Enterprise, it was mentioned that they could "point their antennae" at people in DS9: "The Sound of Her Voice." First alluded to by Data's line regarding four-partnered marriage in the TNG episode Data's Day, Andorians are a four-gendered species with all four required to combine in union for procreation.

The Gorns are a green reptilian humanoid species, average height: 2 meters (male) 1.4 meters (female). They have a life expectancy of 55 years for males and 21 years for females.

Being cold-blooded, they require ambient warmth and prefer to live in tropical climates. Their respiration system is less advanced than most, and provides just enough oxygen to the body to remain functioning. One internal source of temperature is when a female Gorn gives birth: Gorns lay eggs, which hatch while still inside the oviduct and appear to be live births. Their eyes are covered in thousands of facets, each with its own protective lid.

Humans are a red-blooded "humanoid" species (originators of the name) with average heights of: 1.7 meters (male) 1.5 meters (female). They have a life expectancy of 115 years for males and 122 years for females.

Information on Human anatomy is abundant, and as such is excluded from this particular manual. Texts regarding humans is available at your local Star Fleet Supply Center for merely 5 credits. Or, for more information, you are advised to contact:

According to the literature, within the next 300 years, the scientific nomenclature for a human will change from Homo sapiens to Homo sol, referencing the home star of the species. Of course, Spock's repeated usage of the term Homo sapiens in TOS dialogue contradicts this.

Their single stomach has two "duodenum," which increase digestive flow efficiency to their small intestines. Special notice is given to their small intestine, and physicians should be careful: as their unique design is "stairway-like levels," which first twist downward, then upward again into the large intestine. The higher body temperature in Klingons are caused by their second liver.

Although its publication predated the premiere of Star Trek: The Motion Picture, and thereby the first appearance of Klingon forehead ridges, the book still predicts that Klingons have undergone some form of genetic engineering as explained in the Star Trek: Enterprise episodes "Affliction" and "Divergence."
However, the book fails to predict the numerous redundant systems (or "brak'lul") explained in TNG's "Ethics." They are, however, shown to have a redundant liver, more variety than most anatomies in the book.

Tellarites legs end in two-toed feet with hooves. Their femurs are notable for missing their third trochanters, and their fibulae are vestigial. Their digestive system is designed for plants, and as such they have two stomachs which utilize bacteria to break down the food before entering their single intestine. They often have multiple births, and their sense of smell and hearing is advanced for a humanoid, while their eyesight is sub par.

The book seems to imply that Tellarites are herbivores, and that their stomachs cannot digest meat. But in Enterprise we learn that canines are a delicacy on Tellar Prime. Also, although no close up has been specifically focused on the legs or feet of Tellarites, the series do not seem to support the "hoofed, pig-like feet" theory used here.

Vulcans are a green-blooded humanoid species with average heights of 2.0 meters for males and 1.7 meters for females. They have a life expectancy of 250 years.

Only minor variations exist between the vulcanoid species, such as the Rigelians of Rigel V, and the Romulans. For more information on the Vulcans, refer to the "Vulcan Physiology" portion of this manual. 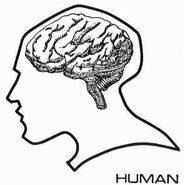 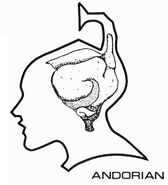 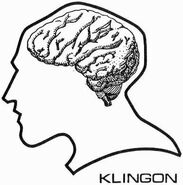 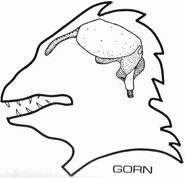 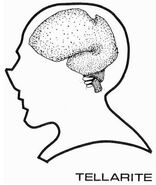 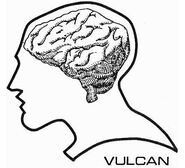 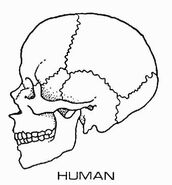 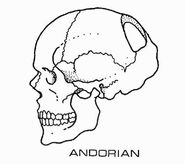 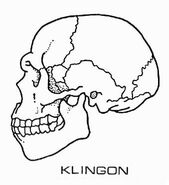 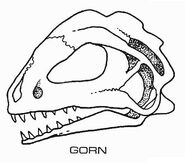 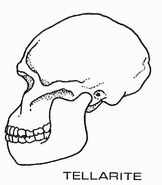 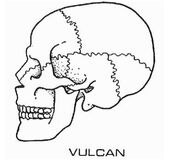 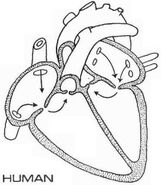 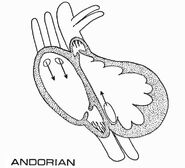 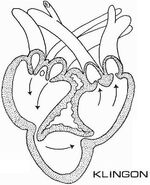 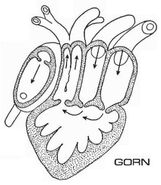 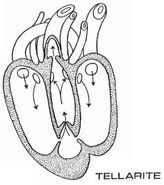 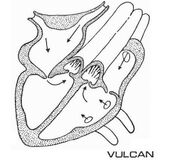 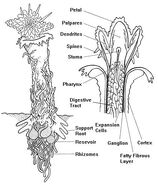 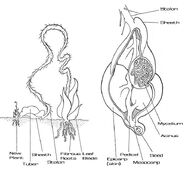 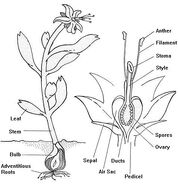 This makes mention of the human aura, which Semyon Kirlian initially claimed his corona-discharge photography technique could detect. But unfortunately, it reads as though its author were megalophobic and cratophobic, hating both greatness and power respectively, and strikes some readers as an anti-power hate screed that they think McCoy might have written. This is evident in its treatment of Gary Mitchell, about whom his best friend, James Kirk--who had been forced to kill him in "Where No Man Has Gone Before"--is blatantly misquoted. 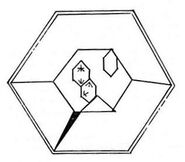 Cell of a Tholian. 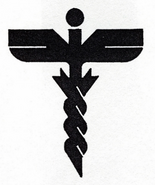