"Well if yer half of the space cowboy Spock claims ya' are—We're in a position to kick major Shi'ar butt!"
—Wolverine to Captain Kirk, 2268.

Captain's log, stardate 4740.5, James T. Kirk recording.
The Enterprise has returned to Delta Vega, the Federation quarantined planet where this ship lost two of its finest crew members... and I lost my best friend. I can't say I am glad to be back. I'm even less pleased at the sight of the spatial anomaly which circles the planet. At first glance it appears to be a variation on the psionic energy which mutated Lieutenant Gary Mitchell and Doctor Elizabeth Dehner... into potential gods intent on reshaping an entire universe in their image.

The USS Enterprise arrives in the vicinity of Delta Vega, Lieutenant Uhura informs Kirk that she is receiving a subspace signal but it is jammed by the energy in the spatial rift. Chief Engineer Scott reports that shields are holding. Commander Spock informs Kirk that the sensor readings confirm the rift to be pure psionic energy, while it appears to lack sentience, Spock refers to it being alive.

Uhura informs the captain that she has isolated the signal and identifies it as a distress signal being transmitted in a language that is not recognized by the universal translator. Suddenly a ship rips through the psionic energy, the passage of the ship renders the anomaly unstable and Spock suggests pulling back. Kirk orders Scotty to get a tractor beam lock on the ship but before Scotty can reply the craft is destroyed in the wake of the anomaly's sudden expansion.

Spock states that the sensors had penetrated the ship's hull a few seconds before it was destroyed and registered seven life forms on board that showed to be near-human. The readings raise a comment from Doctor McCoy which prompts Spock to specify that the readings indicate something between Human and humanoid. Ensign Chekov brings Kirk's focus back on the viewscreen in time for him to see a large starship drop out of cloaking. Spock informs Kirk that the ship as weapons locked on the Enterprise. After trying to hail the unknown ship, it launches a projectile at the Enterprise. The projectile stops before hit the ship's shields and reveals itself to be "The Gladiator", Praetor of the Imperial guard and claims Delta Vega in the name of the Children of Sharra and K'Ythr. He then punches the Enterprise damaging her shields.

Uhura reports that she as identified the destroyed ship as a Shi'ar Empire royal transport. As Scotty steps off the bridge he gets the feeling of being watched. Hidden in an air duct is Wolverine who has been observing the entire event. Jumping on top of the turbolift he makes his way through some Jefferies tubes to join the rest of the X-Men in a cargo bay.

Jean Grey asks Wolverine if they are on board Deathbird's ship. He answers that they are not, as they should have expected when they were sent by Lilandra to track down her renegade sister, they are instead on a starship named Enterprise who is part of something called Federation. Beast uses a scanning device hooked into the ship's computer system to learn that the craft is a Constellation-class ship that was commissioned in 2245.

That latter fact preoccupies Cyclops, but he has more pressing issues at hand such as Gambit's injuries. Cyclops orders Storm and Beast to find the med-center, while he and the others look for a way to stop Deathbird. Jean searches the ship with her telepathic powers for a way off but her presence is sensed by Spock on the bridge who asks permission to leave and check out what Kirk would call a hunch.

In sickbay, Storm makes sure the coast is clear before she and Beast lower Gambit down from the air duct they used to get there. McCoy walks in and surprises them. Beast tries to explain their presence but McCoy is more interested in healing Gambit, who is in bad shape.

On deck 19, the X-Men travel a corridor on their way to a shuttle bay, Cyclops would rather find another way then stealing one the Enterprise shuttlecraft, but the fewer people they involve the better. Cyclops is interrupted by Spock, standing in their path, pointing a phaser at the group. He tells the X-Men that though their plan is imminently logical, he cannot allow them to continue. Spock explains that after feeling the presence of Jean Grey, he scanned for intruders and after finding none he thought of this access way behind engineering that was cloaked due to the energy output of the dilithium crystals.

Spock asks the X-Men to follow him to security, when Wolverine lunges at him. Cyclops tries to stop him but it is to late as Wolverine enters Spock's grasp, he falls victim to a Vulcan nerve pinch. The effect is very short and Wolverine gets back up and punches a surprised Spock, threatens him with his extended claws and requests for the X-Men to be taken to his leader.

On the bridge, Kirk receives a communication from McCoy asking him to get down to sickbay, to meet new friends when Spock, Cyclops, Bishop, Jean Grey, and Wolverine step onto the bridge. Spock explains that he found the X-Men on deck 19 and that people in sickbay are also X-Men. On the Shi'ar warship's bridge, the vizier confirms to Deathbird that the psionic rift is self-generating. He also thinks that it generated itself in their universe but is now located in this universe and is being controlled by something on the surface of the planet below. The Gladiator mentions the Enterprise and the Federation, both of which are of little concern to Deathbird.

On Delta Vega the rocks and mud that started turning to glass and concrete as the psionic rift appeared, have now turned to a village, the streets walked by a possessed Gary Mitchell whose body was overtaken by Proteus. He awaits the coming of his visitors.

The commanding officers and X-Men gather in the briefing room when the expansion of the rift rocks the ships. Spock can now detect sentience in the mutating rift, the mention of a living psionic entity lead Cyclops and Jean Grey to immediately think of Proteus. After the room as emptied Jean Grey tells Kirk that she can sense that he as not shared all that he knows on the rift. Though it is classified information, he shares the events that took place on Delta Vega and the reasons that led to the loss of his best friend.

Captain's log, supplemental.
The crew of the Enterprise along with most of the X-Men, have beamed down to the planet's surface... only to find... a Scottish village.

Chekov reports that there should be no village here but rather an open plain. Storm tells the group that it would seem that two threats have evolved to a third. From up the street comes Proteus/Mitchell's voice referring to himself as us. Surrounded by Deathbird and her imperial guards, he goes on to explain that he left Earth for means to re-corporate himself into a body that would not burnout like his previous hosts. During his search he came across the psionic rift that propelled him to this universe where he found the body of Mitchell. After bonding "They" discovered that they could control reality itself.

At the same moment the planet starts to violently shake as it tears itself apart. Bishop mentions that he might be more useful on the ship where he could re-channel vast amounts of energy. On the bridge, Spock, who was left in command, and Beast speculate on solutions when Beast suggests using a tractor beam to eviscerate a huge part of the rift and use Bishop's powers to put the extra energy to good use.

Proteus/Mitchell raises a force field around him and turns on Deathbird and her guards. Leading the rival groups to join forces as they attack him, to little result as the force field easily withstands all physical attacks. Kirk asks Jean Grey to take him inside Mitchell's mind in hopes of reaching his humanity.

The talk has little effect on the sanity of Proteus/Mitchell. Spock informs the landing party that the ship will attempt to destroy the rift. McCoy objects but Cyclops tells Spock to do what he must even if it means the death of Jean Grey and Kirk who are still inside Proteus/Mitchell's mind.

When the procedure is initiated Kirk and Jean Grey exit Mitchell's mind. Proteus/Mitchell tries to hold onto his powers but Mitchell's humanity resurfaces begs Kirk to kill him. Kirk apologizes to Mitchell before raising his phaser and fires. The X-Men combine their powers to the crew's phaser beams and take down Proteus/Mitchell while the Enterprise fires the drawn energy back at the rift, boosted by Bishop who stands atop the ship's deflector, causing the rift to contract on itself.

On the surface Kirk looks for Mitchell's body but finds nothing. McCoy tells Kirk that Gary might finally rest in peace. The X-Men round up Deathbird and her guards who peacefully surrender and accept return to the Shi'ar Empire.

As the groups bids farewell to each other Cyclops tells Kirk that this is one of the most pleasurable "alternate futures" he was given to see as an X-Men. The mutants embark on the Shi'ar warship and disappear into the rift before it closes itself.

On the bridge Spock and McCoy get involved into another argument, which leaves Kirk thinking that the universe is back to what they would refer to as normal. He orders Sulu to bring them out of orbit. When Sulu asks where to? Kirk answers, to the future, Mr. Sulu... to the future.

The Enterprise arrives at Delta Vega I 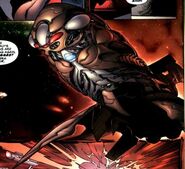 Bishop helps the Enterprise to close the psionic rift

Bishop and Scotty in Engineering 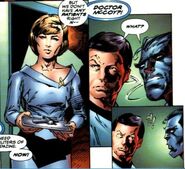 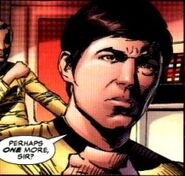 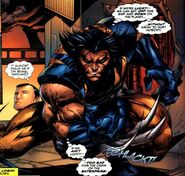 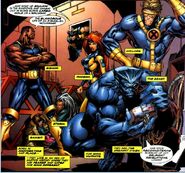 The X-Men in a cargo bay on board the Enterprise 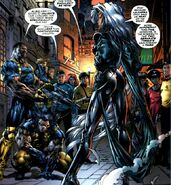 Bridge crew of the Enterprise and the X-Men