Star Trek—Legion of Super-Heroes No. 6

James T. Kirk, Lightning Lad and Chameleon Boy endure the torture of the agony booths as a form of interrogation by Vandar. The three refuse to talk but Vandar waves off Kajz Dox's concerns. Should these three prisoners expire, they have three others.

Several thousand years past, Leonard McCoy reacts with disbelief that Q is a magical entity. Before Cosmic Boy can explain magic, Q cuts him off. He's not magic, he'll all-powerful. But in spite of that, he is trapped and cannot reveal what must be done to free him. In spite of Brainiac's annoyance, Spock remains calm and the Coluan quickly catches on. Though Q cannot outright tell them how to free him, he can still answer any question posed to him. All the two need do is find a loophole in Vandar's instructions. At the moment however, the caveman return ready for the kill.

Kirk, Lightning Lad and Chameleon Boy are removed from the booths before the next three are to be placed within. As he is carried away however, Kirk gets Vandar's attention by calling him stupid and mocking his origins as a caveman. The USS Enterprise has encountered beings like this "genie" of Vandar's. Kirk knows what can done with omnipotence but all Vandar could think to do was conquer and build agony booths? Vandar had the opportunity to quite literally create heaven on Earth but instead brought about hell.

Q holds back Spock and Brainiac, the others can handle the cavemen but they must free him. Cosmic Boy uses his powers to remove the inhibitor collars from their enemies only to find they are not one tribe but two warring parties that Vandar enslaved. Saturn Girl builds on the advantage using her telepathy to render all cavemen to sleep. Enraged, Vandar charges at Chekov and Saturn Girl only to be rendered unconscious by McCoy.

Vandar defends his empire to Kirk who is unimpressed for he has seen better words. Lightning Lad and Chameleon Boy rally around the captain, standing firm against tyranny, and speaking of the peaceful alliance that humanity founded in both their timelines. Now Kirk's words have touched even the Elite Guard before he realizes Vandar's problem: The future. He doesn't even know what that word means.

As McCoy and Saturn Girl affect medical treatment to their friends, Vandar begins to stir before Brainiac has a realization. Vandar ordered Q to enslave the caveman tribes but the time travellers do not fall into that category. Q's imprisonment likely has the same conditions and Spock orders Q to free himself.

Enraged, Vandar claims to embody the future but, backed up by his crew and the Legionaries, Kirk again refutes him. Despite his lifetime and power, Vandar is still the caveman he was at the beginning. An ancient holdover who believes violence is the only option and cannot fathom that tomorrow might not need the violence of today. Both the United Federation of Planets and the United Planets decided conquest, pillaging and senseless violence belonged in the past, they instead looked to the future with hope. And that is why people like them will always defeat conquerors like Vandar.

Free at last, Q explains that he was ordered to take orders from "No one living on the face of the Earth" and that any day now, Vandar would amend that to just him. So all Q had to do was wait for some clever time travellers and send them back to free him. But since Q is freed, the Imperial Planets and Vandar's reign never came about, therefore creating a paradox. Before Q has even finished his sentence, time begins to reset.

In the time bubble, Brainiac 5 thought something was wrong but it turns out to be nothing and he continues on course home. The Enterprise crew materializes in San Francisco, ready to begin a much needed sabbatical.

On planet Holberg 917G, Flint passes the time with a painting before Q appears from behind. Flint believes Q has come seeking revenge but not even Q is that petty. He was simply curious that the once bloodthirsty conqueror is now a man of peace and art. It was Flint's own bloodthirstiness that turned him away from conquest. On that ancient Mesopotamian battlefield, he realized man could rise above the urge to kill. Q is impressed, before pondering whether some other, savage version of Flint remained a conqueror. Flint is taken aback by the existence of the multiverse but as Q explains, there may have been only one yesterday but countless tomorrows await each filled with their own endless possibilities. 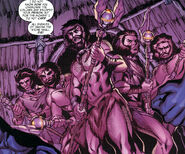