Unlike the previous Star Trek, set on starships, Deep Space Nine's primary setting is a space station, Deep Space 9, formerly the Cardassian station Terok Nor rather than a starship. The station is a key strategic location, near to the planet Bajor, itself near the Cardassian border, and most significantly (following the events of the first episode) the station is situated next to the Bajoran wormhole, giving access to the Gamma Quadrant. The station also had a complement of runabouts, and later the USS Defiant, allowing stories to take the characters away from the station itself.

Due to the mostly stationary situation of the series, DS9 tended more toward continuing stories, rather than the "alien of the week" approach common to other series. Some of the main arcs involved: the Bajorans growing from years under occupation by the Cardassians, eventually joining the Federation; Captain Sisko's role as the Emissary; and the build up to, eventual breakout, and aftermath of, the Dominion War.

The series established and developed several races and cultures, most prominently the Bajorans and Cardassians, but with significant attention also paid to the Trill, Ferengi and Klingons. The Cardassians were commonly portrayed as the series' villains, and were later supplemented by the Dominion, led by the Founders, and represented by the Vorta, and Jem'Hadar soldiers, and the Dominion's allies, the Breen.

Stories set after the Dominion War introduced, or elevated several, other major characters: Elias Vaughn, the station's new first officer once Kira takes command; Ro Laren, who takes over from Odo as chief of security; Nog, Quark's nephew, who was featured throughout the series as Jake Sisko's best friend replaces O'Brien as operations officer; Thirishar ch'Thane is the station's new Andorian science officer; Prynn Tenmei is the Defiant's new helm officer; Sam Bowers is the station's new tactical officer; and Taran'atar, a Jem'Hadar, is sent by Odo as an envoy to the Alpha Quadrant.

The series arc based story telling also established numerous recurring characters. Some of the most prominent include Cardassians such as Elim Garak, Skrain Dukat, Corat Damar and, in the post-finale novels, Akellen Macet; Bajorans including Opaka Sulan, Winn Adami, Bareil Antos, Shakaar Edon and Yevir Linjarin; representatives of the Dominion such as the Female Changeling and Weyoun; Ferengi including Rom, Zek, Ishka and Brunt; patrons and employees of Quark's such as Morn, Leeta and Treir; Klingons including Gowron and Martok; members of Starfleet such as Admiral William Ross and other station personnel, including Michael Eddington (later a leader of the Maquis), Simon Tarses and Phillipa Matthias; friends and family of the primary characters such as Keiko, Molly and Kirayoshi O'Brien, Sisko's partner Kasidy Yates and his father Joseph, and Tora Ziyal, Dukat's daughter and Kira's friend; and finally Vic Fontaine, a hologram who is a singer in the vein of Frank Sinatra.

Between January 1993 to May of 1999 there were 173 episodes of Deep Space Nine, including six direct two-part episodes over the course of seven seasons. Deep Space 9 also appeared in two episodes of Star Trek: The Next Generation; "Birthright" and "Firstborn", and the first episode of Star Trek: Voyager, "Caretaker".

Pocket Books have published numerous prose works based on Deep Space Nine. These include a series of twenty-seven numbered novels published during Deep Space Nine's television run. These stories generally take place within the first four seasons of the series.

Along side the numbered series Pocket published the occasional unnumbered novels, including several novelizations of key episodes. Following the conclusion of the television series the books have continued the narrative in what is informally referred to as the "DS9 relaunch".

In addition to stand alone novels the series has had short stories and novellas, including the short story anthologies The Lives of Dax and Prophecy and Change and the series of novel anthologies, Worlds of Star Trek: Deep Space Nine (which make up part of the relaunch series).

The series is also featured in a line of young adult novels, about the adventures of Jake and Nog while growing up on the station.

Deep Space Nine stories have appeared in many of the crossover miniseries Pocket Books have published, including Invasion!, Day of Honor, The Dominion War, Double Helix, The Captain's Table, The Badlands, Dark Passions, Section 31, Gateways, The Brave and the Bold, Mirror Universe, Myriad Universes and Star Trek: Typhon Pact.

Additionally the Lost Era novel Catalyst of Sorrows prominently features Sisko. There have been several direct crossovers with the Star Trek: Corps of Engineers series, which is set in the same time period as the DS9 relaunch.

In 2008 the Star Trek: Destiny trilogy established Ezri Dax as the captain of the USS Aventine, with the relaunch characters Sam Bowers and Mikaela Leishman as part of her crew. After Destiny, the Aventine also appeared in A Singular Destiny, the Typhon Pact novels Zero Sum Game and Brinkmanship and the TNG novel Takedown.

In 2011, Rough Beasts of Empire featured Sisko returning to Starfleet as the commanding officer of the USS Robinson and also established that Kira was now a Vedek. Vaughn has been critically injured in the Borg invasion.

Deep Space 9 was destroyed by rogue elements of the Typhon Pact in the novels Plagues of Night and Raise the Dawn. Raise the Dawn established a new Deep Space 9 being constructed and the Star Trek: The Fall novel Revelation and Dust featured it becoming operational. Original Sin features Sisko's command of the Robinson in a mission in the Gamma Quadrant, with his wife Kasidy and daughter Rebecca aboard the Galaxy-class vessel.

The first Deep Space Nine comics were published by Malibu Comics shortly after the series started. Malibu published a wide range of comics; A monthly series which ran for thirty-two issues; Two annuals, and four one-shots or specials; The Celebrity Series, which comprised of two one-shots written by Star Trek actors; and three miniseries, including The Landmark Crossover, a DS9/TNG crossover story co-published with DC Comics (who were publishing TNG comics at the time).

In 1996 Marvel Comics took on the Star Trek license; they too published a monthly series of Deep Space Nine comics, which ran for fifteen issues. Marvel also published a spin-off series Star Trek: Starfleet Academy which featured Nog at the Academy, and several crossovers with DS9. Both series, along with elements from Star Trek: The Next Generation, were part of Marvel's Telepathy War crossover series, which included one issue of the Starfleet Academy series, two issues of the Deep Space Nine series, a crossover issues published in the Unlimited series, and grand finale in a special one-shot crossover titled Reality's End. One further DS9 story was published in Unlimited, Issue 8.

WildStorm Comics acquired the Star Trek license in 1999; they published the Deep Space Nine miniseries N-Vector, and the DS9/TNG crossover series Divided We Fall, both set after the TV series in the same continuity as the prose DS9 relaunch. Additionally, a Benny Russell story, "When the Stars Come a-Calling", was published in Wildstorm's Star Trek: Special.

IDW Publishing did not take on the license to produce new DS9 comics until three years after they began publishing TOS and TNG comics. In 2007, however, Sisko appeared in the second Klingons: Blood Will Tell comic "Beneath the Skin". In 2009 an elder Kang appear in "Four Thousand Throats...", which partially served as a prequel to the DS9 episode "Blood Oath". 2009 also saw IDW released Best of DS9, which collected several early DS9 Malibu Comics. Finally at the end of the same year IDW began to publish their own DS9 comics, with a Cardassian themed issue of Alien Spotlight II and the start of IDW' first DS9 miniseries, Fool's Gold. The DS9 characters met the Kelvin timeline in The Q Gambit.

Deep Space Nine has had no original audio productions, but to date several novels have been adapted into audiobooks.

The first Deep Space Nine game was Crossroads of Time, published in 1995. Three other DS9 games followed, the most recent being Dominion Wars, released in 2001.

Deep Space 9 is a visitable location in Star Trek Online, with locations such as Quark's, the Promenade, the Replimat and the Bajoran temple rendered for the game. The Bajoran wormhole also appears.

From 1993 to 2001, Pocket Books and Andrews McMeel Publishing published nine Deep Space Nine calendars, which featured episode images, as well as new images of Deep Space 9 and the Defiant by Gary Hutzel in some of the later calendars.

Deep Space Nine imagery can also be found in the Ships of the Line calendars.

In addition to its RPG, Decipher have also produced the Star Trek Customizable Card Game since 1994, which encompasses the entire Star Trek franchise, including numerous DS9 based cards. 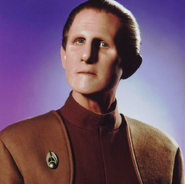