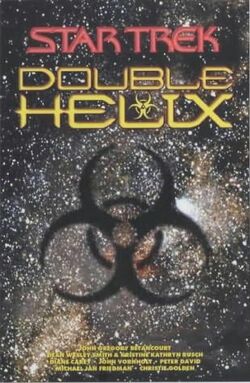 Like a strand of mutating DNA, a deadly conspiracy winds its way through the Alpha Quadrant, even as it stretches across several years of Starfleet history. This special volume contains the entire bestselling saga - by some of Star Trek's most popular authors.

Deanna Troi's life is endangered by a mysterious plague that threatens to spread throughout the Federation and beyond!

On the Cardassian space station known as Terok Nor, Dr. Katherine Pulaski struggles to heal the planet Bajor!

An elderly Dr. McCoy reunites with Ambassador Spock to save the Romulan royal family -- and a new generation!

Lieutenant Tom Riker joins forces with the outlaw Maquis to rescue a world in peril!

Double or Nothing by Peter David

Along with Captain Mackenzie Calhoun of the USS Excalibur, Jean-Luc Picard tracks the deadly contagion to its source!

The First Virtue by Michael Jan Friedman and Christie Golden

Years before commanding the USS Enterprise, a young Picard must prevent a war -- and witness the secret origin of a diabolical threat that would someday menace all he cares for!

Retrieved from "https://memory-beta.fandom.com/wiki/Star_Trek:_Double_Helix?oldid=622604"
Community content is available under CC-BY-SA unless otherwise noted.