Star Trek: New Frontier is a series chronicling the adventures of Captain Mackenzie Calhoun and the crew of the USS Excalibur. Created by Peter David in 1997, it was the first Star Trek book series to prominently feature characters created directly for print rather than for the screen.

New Frontier was created in 1997 by Pocket Books Editor John Ordover and writer Peter David. It was considered to be an experiment, to see how readers would react to novels which did not center on major characters or the settings featured in the television series.

Ordover conceived of New Frontier as an analogue to the post-Soviet USSR, where numerous forces once kept in check by the central government began to battle to fill the power vacuum, and old conflicts begin to resurface. (Voyages of Imagination)

David created three original characters for New Frontier novels: Mackenzie Calhoun, formerly known as M'k'n'zy of Calhoun, leader of the Xenexian rebellion against the alien Danteri; Si Cwan, a former Thallonian nobleman now out of power; and Burgoyne 172, the Hermat Chief Engineer of the USS Excalibur. Three more characters -- Soleta, Zak Kebron, and Mark McHenry -- were created by David for his trilogy of Starfleet Academy novels featuring Worf, and brought back to the new series as adult officers. Elizabeth Shelby, Robin Lefler, and Dr. Selar were also included due to their status as "one-shot favorites" of Star Trek: The Next Generation fans.

The first four titles were released as shorter (and cheaper) "chapbooks", in much the same manner as Stephen King's The Green Mile was originally published the year prior. These four books were later re-released in a single hardbound omnibus.

The New Frontier series has been quite successful, and includes some of the best selling of the recent Star Trek novels. Its success is directly responsible for other similar lit-only Trek series, such as Star Trek: Starfleet Corps of Engineers and Star Trek: IKS Gorkon.

New Frontier stories regularly appear in crossover miniseries and short story anthologies. The series has also expanded into the realm of comics; In 2000 WildStorm Comics published the first New Frontier comic and approached David about creating a second but lost the license before that came to fruition. In 2008 the new comics licenser, IDW Publishing, approached David about a new New Frontier comics project, resulting in the publication of a five-part miniseries. [1]

Beginning in July of 2015, New Frontier returned in a series of eBooks published by Pocket. [2] 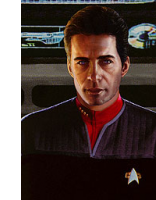