The novels were announced by Cross Cult's "Star Trek Romane" account on their Facebok site on 23 November 2015. Bernd Perplies, one of the authors, elaborated on the series in online posts. The three novels would feature Captain Richard Adams of the USS Prometheus facing off against Klingons, other aliens and terrorists in the Lembatta Cluster in the Beta Quadrant, shortly after the assassination of Human Federation President Nanietta Bacco and the election of Andorian President Kellessar zh'Tarash. 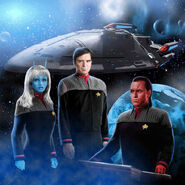 Captain Adams and the Prometheus