Star Trek: The Collector's Edition was a part-work magazine and DVD collection published by GE Fabbri in the UK.

The initial collection ran for seventy issues coming to an end in December 2006. Those issues each contained three episodes of Star Trek: The Next Generation with the exception of the last two issues which both contained two episodes and ten issues released variously throughout the run which contained the ten Star Trek movies to date.

In February 2007 the collection began once more, this time featuring episodes of Star Trek: The Original Series, released in production order.

The magazines also contained a behind the scenes section which was not originally included in the Star Trek Fact Files but was largely comprised of previously published interviews and production information from other sources. 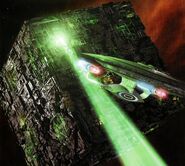 Vulcans fighting in the Kal-if-fee