In 1979, scenes from Star Trek: The Motion Picture were adapted into five brief color comic strips on the sides of six McDonald's Happy Meal boxes. One adaptation appeared on two boxes. Each box was titled as a McDonald’s Star Trek Meal. Each strip has characteristics that are accurate to and inconsistent with the film. The strips were untitled and are listed in order of the plot of the film.

Three Klingon battle cruisers “are attacked by a strange force in the shape of a cloud,” as three beams shot out from the cloud. Klingons retaliated by firing torpedoes, to no avail. The cloud then fired bolts at the cruisers, which “disappear.”

The scene was depicted in five panels, with the ships drawn to high levels of detail and accuracy, though flames shot out of the back in some panels. The ships were drawn as if destroyed, with wreckage and a sound effect. The cloud was red and puffy. The Klingons attacked without provocation in the film.

A man and woman aboard Epsilon 9 witnessed the “disappearance” of the Klingon ships “into the alien force” on a viewer. The woman said they’d plotted it, and “the force is heading for Earth.”

The scene was depicted in five panels. Epsilon 9 was called a planetoid but drawn as a space station. The two officers were depicted differently than in the film. Here the male was muscular, with a skin tight uniform, and the woman had bright red hair. In Marvel Comics’ adaptation of the film, the male had red hair and looked much older.

“Commander Kirk” rode a travel pod toward the Enterprise in drydock. Meanwhile, a male transporter operator was beaming aboard four crewmen. The two in the back looked surprised. Then it “breaks down and two crew members disappear.”

The scene was depicted in four panels. The Enterprise, drydock and travel pod were drawn with high levels of detail and accuracy, though the pod had flames coming out the back. The cloud was red and puffy, with sparks coming from it. In the film, Kirk was an admiral, not a commander, and Janice Rand operated the transporter. In the strip, the male operator had a muscular build and a skin-tight outfit.

On a viewer, Kirk, Spock, and another person (possibly Sulu) watched from the bridge of the Enterprise as Epsilon 9 “is surrounded by the cloud’s energy force.”

The scene was depicted in three panels. The station was drawn as if destroyed, with a sound effect and debris. The station exterior was highly detailed and accurate. In the film, the attack was shown on the rec room viewer in front of the entire crew, and Spock had not yet come aboard.

On the bridge, Kirk, Spock, Sulu, Ilia and Uhura “await the countdown,” and the Enterprise departed drydock. “Their mission… stop the cloud before it reaches Earth.”

The scene was depicted in four panels. In the third panel, flames shot out from the Enterprise’s warp engines as the ship departed. In the film, Spock had not yet come aboard.

The Star Trek Meal boxes were reproduced in The Newspaper Comics, Volume 1, along with the five Star Trek Video Communicator original story comic strips that came inside the boxes. 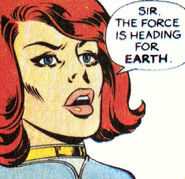 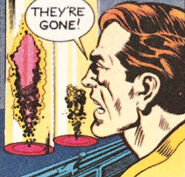 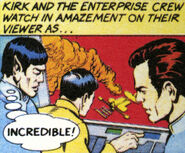 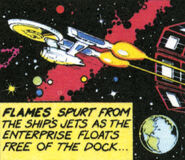 Enterprise blasts away from drydock